The Alwin Tan trained gelding missed the kick before recovering to win his maiden on debut over 1000 metres at Kranji.  “I was worried when he was slow out of the gates – I think it’s greenness as he was very nervous at the parade ring,” Tan said.  “But he hit the line well.”

Tan backed his own judgment when buying the winner after seeing him take a barrier trial at Cambridge in March.  “He only weighs 470kg but I really liked his action.  He’s a horse with some potential.”

Matamata based Karen Fursdon trained the opening leg of the Lucky Unicorn double with Silk Chardonnay at her home track on Saturday.

Silk Chardonnay (5m Lucky Unicorn – Silk Domaine by Octagonal) was rated perfectly in front by stable apprentice Anna Jones to win the Mitre 10 Hcp (2000m).  “She tries hard and won nicely,” Fursdon said.  “I would love to get her into the NZ Cup next month – I don’t think the two miles will be a problem.”

The G3 New Zealand Cup (3200m) is scheduled for November 15 at Riccarton.  Silk Chardonnay will go a long way to qualifying if she wins over 2400metres at Ellerslie on October 25.

Lucky Unicorn is a stakes winning son of Redoute’s Choice and is standing his second Sunspeed season at Westbury Park in Pinjarra for a $3,300 (inc gst) service fee. 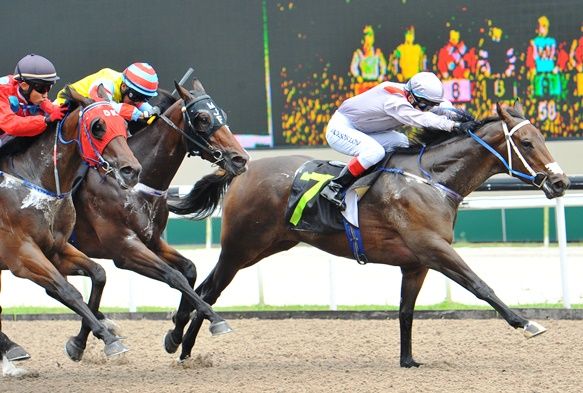