Gold Front Thoroughbreds sprinter Onadowntowntrain will be searching for a running double when racing returns to Ascot this Saturday.

Onadowntowntrain (4g Exceed And Excel – I’mtoogoodtobetrue by Good And Tough) is coming off a brilliant victory over the minimum trip at Belmont on October 4 but he will have to overcome a jump in grade and a wide barrier at Ascot.

“Shaun O’Donnell nursed him home last time – it was a super effort against a decent field,” trainer Brent Albuino said.  “Getting him to settle is the key and that’s why we’ve kept him at 1000 metres this Saturday.”

Gold Front owners Alan and Sue Olive also have Choisir filly Prete A Partir ready to break through at Ascot.  She won on debut at the carnival course in March and was placed first-up at Belmont on October 1.

The Olives had been confident of winning a Group 3 with Awesome Rock in the Caulfield Classic (2000m) this Saturday but he has been sidelined with a hock injury.  The Fastnet Rock colt was crying out for a longer trip after closing better than anything else in the G3 McNeil (1200m), G2 Danehill (1200m) and G3 Guineas Prelude (1400m).

Trainer Leon Corstens will bring him back for a Group 1 campaign targeting the Australian Guineas (1600m) at Flemington on March 7.

Hoofnote:  Former Gold Front galloper Divine Calling was a very impressive winner on debut in Hong Kong on Sunday.  The grey gelding’s trainer Tony Millard is already looking to the future and mentioned the G1 Hong Kong Derby (2000m) in March as a long-term goal.

The Olives raced Divine Calling in a syndicate with Gai Waterhouse.  He won the G2 Stutt Stakes at Moonee Valley and was runner-up in the G1 Caulfield Guineas this time last year before they received a seven-figure offer from new owners Wei Yu and Liu He. 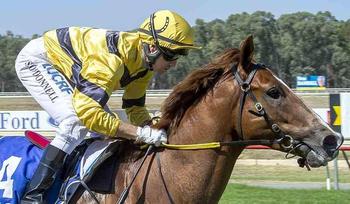