Lucky Unicorn stayer Silk Chardonnay is on the borderline to gain a start in the New Zealand Cup after a front-running victory in the South Auckland Cup (2400m) on Saturday.

Matamata couple Kevin and Karen Fursdon are keen to give the mare her chance over two miles.  “I think she’s about 26th in the order of entry at this stage,” Kevin Fursdon said on Monday.  “We will have a better idea after the next pay-up stage later this week.”

The G3 New Zealand Cup (3200m) on November 15 is one of the features at the Riccarton carnival next month.

Silk Chardonnay (5m Lucky Unicorn – Silk Domaine by Octagonal) was never in danger of being run down at Ellerslie on Saturday.  “The key is to just let her run along in front,” Fursdon explained.  “As long as she doesn’t pull, she will stay all day!”

The Fursdons are fans of former NZ stallion Lucky Unicorn who is now based at Westbury Park in Western Australia.  “Silk Chardonnay is a big, strong stayer and can handle pressure – like a lot of the horses we’ve had by Lucky Unicorn.  They just need a bit of time.”

Stablemate I’ll’ava’alf is another Lucky Unicorn who has improved with maturity.  He won up to 2500 metres at Rotorua, Avondale and Hastings last season as well as finishing second in the LR Cornwall Hcp at Ellerslie.

“We also sold that latest Lucky Unicorn winner in Singapore,” Fursdon said.  “But I think we might have let him go too cheap.”

Best Nine (3g Lucky Unicorn – Tyndinsky by Stravinsky) looked a nice type winning on debut at Kranji last Sunday.  He was purchased by trainer Alwin Tan after winning a catch-weights trial at Cambridge in March.

Meanwhile, Silk Chardonnay has pulled up a treat in readiness for her trip to the South Island.  “We will head down to Christchurch even if she doesn’t qualify for the NZ Cup,” Fursdon said.  “We can always revert back to a restricted staying race over 2500 metres on the same day.” 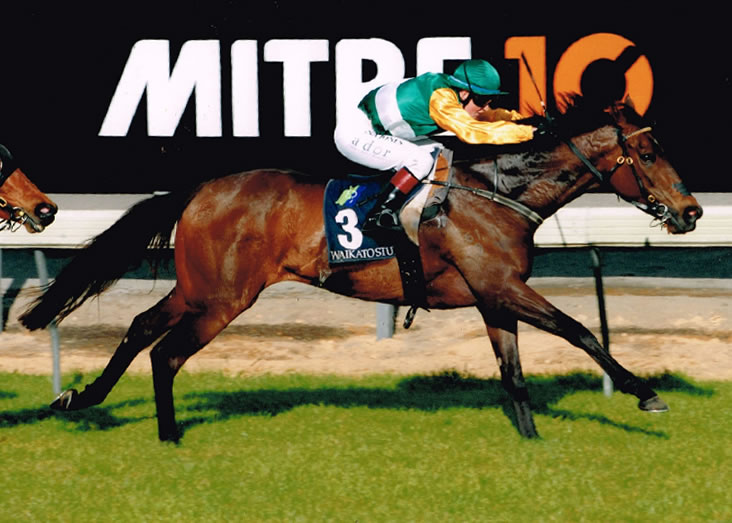