Abby Adsit is getting down to business in New York with winners like Frost Giant (USA) filly On A Snowy Evening.

On A Snowy Evening (3f Frost Giant – Rhubarb Red by Carson City) made up a tremendous amount of ground to win over 1200 metres at Belmont on Thursday.  She settled perfectly for Junior Alvarado and then took off after Jilly Mac to nail the finish by a nose.

The winning filly is a $30,000 Fasig-Tipton yearling graduate.  She is a daughter of Yarradale Stud shuttler Frost Giant and her dam won the LR Mum’s Command Stakes at Suffolk Downs in Boston.

Adsit, 27, signed up with Drawing Away Stable earlier this year and is being assisted by her father Eric Adsit, a retired harness trainer who moved from track to track with his wife Jean and raising their daughter along the way.

Eric and Jean have plans to sell their Saratoga home and buy one in Long Island, near Belmont Park and Aqueduct.

Though she graduated from Saratoga High School nine years ago, it was just one of nine different schools she attended during her elementary and secondary education.  “Some kids are army brats,” Abby said.  “I was a horse brat.”

The famed Saratoga Race Course is a beloved oasis where the sport’s elite have competed since the long ago days of the American Civil War in the 1860s.  And its rafters have rocked and swayed from the enthusiastic salutes for its greatest heroes.

Adsit graduated from Union College in Schenectady with a B.A. in English before entering racing full time.  “When she was little, she wanted to go to the barn with me,” Eric said.  “It was her dream to be a trainer and now she’s living that dream.

As a young teen, Abbey would help her father prepare horses and she would later gallop out for trainers like Rick Violette, Todd Pletcher and Wesley Ward.  After graduating from college, she went to work as an assistant to Linda Rice, New York’s top female trainer with upwards of 90 horses.

“Working for Linda was my graduation school.,” Adsit said.  “I learned a great deal from her.”

Sus Annmaries Gold (4f Frost Giant – Gold Ginny by Gold Legend) is a homebred for Andrew Cohen’s Sunrise Stables and she won twice at two before adding an allowance at Aqueduct.

Frost Giant is a Group 1 winning son of Giant’s Causeway and stands at Yarradale Stud for a $9,900 (inc gst) service fee. 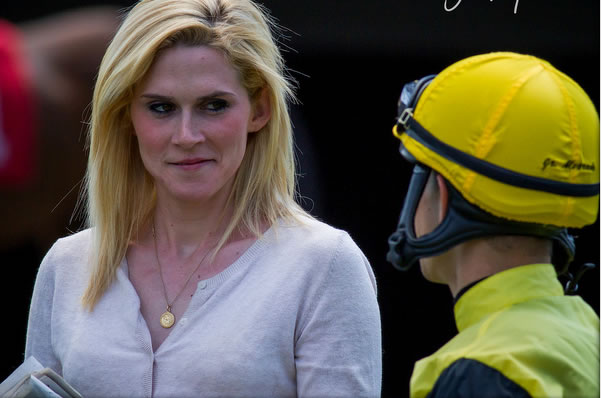