Econsul (NZ) has a talented tandem act with Precious Gem and her younger brother Happy Money.

Precious Gem was runner-up to Suavito in the G3 Tesio Stakes (1600m) that closed the Cox Plate card at Moonee Valley on Saturday.  “It was a huge run,” jockey Craig Williams said.  “She gave everything out there.”

Precious Gem (5m Econsul – Gem Of Gems by Peintre Celebre) settled well back before starting a searching, three-wide run passing the half-mile.  “She duelled with the early leader down the straight only to be over-run late,” trainer Gwenda Johnstone said.  “Surely a win in a good class race is just around the corner.”

She is due to clash again with Suavito in the G3 Matriarch Stakes (2000m) at Flemington in a fortnight.

Happy Money had completed his second hat-trick this year with another convincing victory at Kranji on Friday evening.  “He’s done a fantastic job given this is only his first year of racing,” jockey Danny Beasley said.  “He’s already won six and lifts to the next level every time he comes to the races.

“This horse is in tip-top condition and I was confident from the start.  I knew he would kick up and get going when I ducked back to the inside.”

Happy Money (4g Econsul – Gem Of Gems by Peintre Celebre) has been restricted to sprints up to 1200 metres but will eventually stretch out to longer trips.  “More distance will mean he has more time to relax,” trainer Alwyn Tan added.  “He has such a big heart.”

The Singapore sprinter is the last reported foal of unraced mare Gem Of Gems who is related to Group 1 winners Turffontein, Hit The Roof and Penny Gem.

Econsul (NZ) has his first Sunspeed foals on the ground at Darling View Thoroughbreds.  He stands at the Mundijong stud for a $4,400 (inc gst) fee. 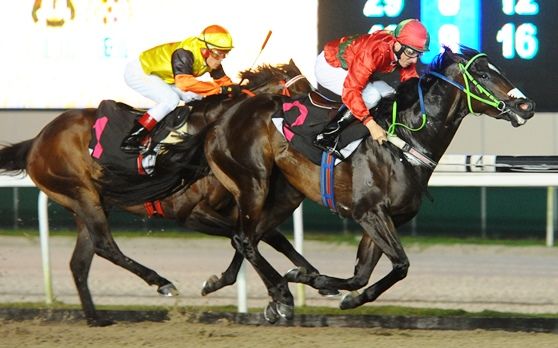