Front-running La Tia rebuffed her rivals for a brave victory in the G3 Athenia Stakes (1700m) on turf in New York on Sunday.

The free-wheeling daughter of Yarradale Stud sire City Place (USA) earned her third Group 3 this year following identical 6 length victories in the Arlington Matron in May and Ontario Matron in July.

Sunday’s finish at Belmont Park was much closer .  La Tia cut the corner into the stretch and was in command by more than two lengths at the furlong before Group 1 winning mare Byrama and Overhead launched late charges.

“I knew she was going to give me 100%,” jockey Joel Rosario said.  “She had to dig in but I was very confident she would finish strong.”

La Tia (5m City Place – La Adelita by Sky Classic) was coming off a third-place finish in the G2 Canadian Stakes at Woodbine and a brave fourth in the G1 Beverly D Stakes at Arlington.

“They pressured me last time at Woodbine,” Rosario explained.  “The stretch up there is longer than Belmont but she ran a good race and got beat by some very good horses.”

La Tia has now won 9 of her 22 starts for $803,300 in prizemoney.  Trainer Armando de la Cerda said his mare may run one more time this term but hasn’t decided where or when she will sign off for the year.

City Place is a son of champion sire Storm Cat and Group 1 winning mare Glitter Woman.  He boasts an 82% winning strike-rate and is currently covering his first book at Yarradale Stud for an $8,800 (inc gst) service fee. 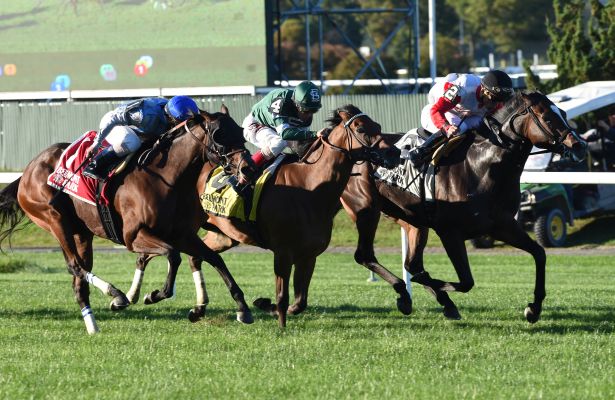