Lucky Unicorn mare Coastal Express displayed all her fighting qualities with a brave victory in Bayleys Bulls Cup (1400m) at Awapuni on Saturday.

Trainer Karen Zimmerman, who shares in the ownership of the mare, was full of admiration for the five-year-old who improved her record to 9 wins from 24 starts.  “When she gets to the front, she doesn’t want anything to get past,” Zimmerman said.  “She relaxed beautifully and when they challenged she just kept fighting.”

Zimmerman wasn’t sure if the mare had won in a hotly contested finish with Authentic Paddy (Howbaddouwantit) and race favourite Jubilate (Falkirk).  “I watched the replay and thought she put her head down right on the line.  She has done a super job all the way through.”

It will cap off a successful year for Lucky Unicorn, a stakes winning son of Redoute’s Choice, who is now based at Westbury Stud at Pinjarra in WA.  His other feature winners in NZ this year include Rock Diva (G3 Sunline Vase), Caduceus (LR Champagne Stakes) and Silk Chardonnay (South Auckland Cup). 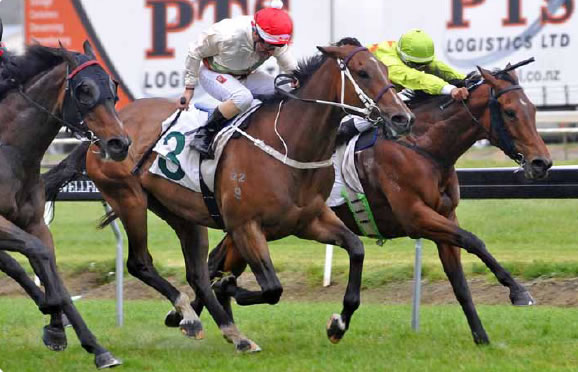