Coastal Express (NZ) has fashioned a tidy record up to a mile and trainer Karen Zimmerman believes she can prosper over more ground this season.

The Lucky Unicorn mare was nicely rated in front by stable apprentice Nivesh Teeluck and responded under pressure to account for a competitive line-up at Awapuni on Saturday.  “Nivesh did exactly what I told him – it was a lovely ride,” Zimmerman said after the Power Farming Hcp (1600m).  “I think she will get away with 2000 metres as well.”

Coastal Express (5m Lucky Unicorn – Minori Express by Green Line Express) was making the fourth appearance of her current campaign, having finished third in an open handicap at Otaki at her previous start.

“She went a good race last time and was only swamped by horses out wide,” Zimmerman said.  “She didn’t see them and she likes a dog fight.”

That was evident at Awapuni when she was clearly headed on straightening and rallied strongly to beat Landlord (Keeper) and the favourite Waikaha (Towkay),

Coastal Express and New Zealand Cup candidate Silk Chardonnay are from the same crop sired by Lucky Unicorn when he was based at Cambridge Stud.

Lucky Unicorn (Redoute’s Choice) subsequently transferred to Westbury Park in WA and is currently covering his second Sunspeed book at the Pinjarra stud. 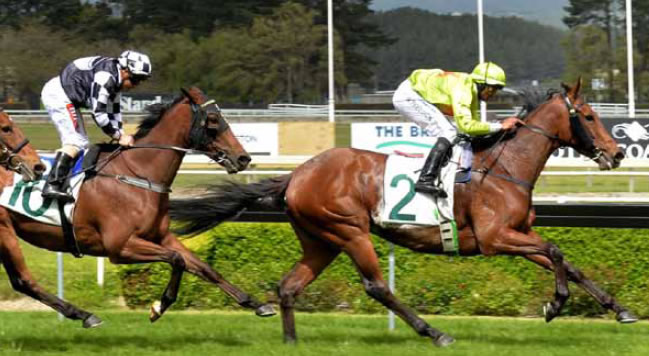