Trainer Robbie Griffiths is considering a trip to Western Australia for Girl In Flight after the Yarradale Stud mare finished a close second in the G2 Matriarch Stakes (2000m) at Flemington on Saturday.

Griffiths has already confirmed stablemate Angelic Light will contest the G1 Winterbottom Stakes (1200m) at Ascot on November 22 and he may also send Girl In Flight across to contest the G1 Railway Stakes (1600m) on the same program.

“It might be worthwhile if there’s more withdrawals from Friday’s flight to Perth,” Griffiths reasoned.  “We will make a decision by Thursday.”

Griffiths will keep his options open by nominating the grey mare for the G3 Eclipse Stakes (1800m) at Sandown next Saturday.

Girl In Flight (4m Commands – Rossiya by Machiavellian) overhauled Sydney mare Amanpour in the Matriarch only to be nailed in the last stride by Suavito.  She races for a partnership comprising Yarradale owner Ron Sayers, Bob Baumann, Andrew Doyle, Frank Giacco, Janice Thomas and Belinda Emons.

Sayers kept a share after selling her to Griffiths for $60,000 at the 2012 Inglis Melbourne Premier Sale.  She started her career with wins at Pakenham, Sale and Caulfield before graduating to a Group 3 victory in the Schweppervescence Stakes (1800m) at Morphettville in April.

“She seems really bright and to have recovered well,” Griffiths said on Sunday.   “If she gives us a positive vibe this week I will consider another run, whether it be in Perth or Melbourne.  If not, then we will just put her in the paddock and bring her back for the autumn.”

Girl In Flight’s dam Rossiya (Fr) won at Sandown in England for Sheikh Mohammed before arriving in Australia in 2003.  She is a sister to Listed Saint-Cloud winner Queen Catherine and descends from G1 Hollywood Oaks winner Princess Karenda. 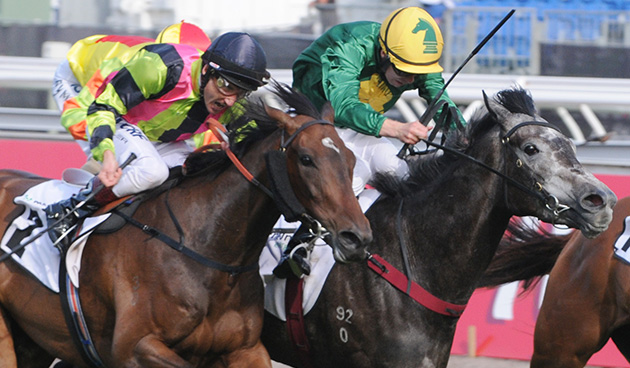