War Chant youngster Chanzig began his career with a powerful finish to the Crown Golden Ale Plate (1000m).  Settling last bar one, he launched a brilliant burst in the straight to win running away from Snatch ‘N’ Grab (Vital Equine) and Senso (Street Sense).

Chanzig (2g War Chant – Fairy Fix by King Ivor) had won both his trials at Lark Hill and Bunbury earlier this month but was allowed to go out at $17.  He was bred and sold by Dawson Stud for $45,000 and is from a half-sister to the dam of Group 2 winners Pure Energy (Reisling Slipper) and Segments (Schillaci Stakes).

“That was a very good win – you never really know what to expect from two year-olds on race-day but he’s done the job,” trainer Ben Pearce said.  “We had a bit each-way because it was such a nice price.”

Pearce trains the gelding for Graeme Daws, who kept a share after the Magic Millions, Adam Fairley, Garry Nelson, Steve Orrock and Garry Smith.   “We’ve got a few others by War Chant at home including another good one who is a close relation to our filly Vampi Lass,” Pearce added.  “He was popular at the sales and we’ve been hearing good reports about his two year-olds at the track.”

War Chant initially shuttled to Western Australian from iconic nursery Three Chimneys Farm and his first Sunspeed yearlings were the talk of this year’s Perth Magic Millions.  Yarradale owner Ron Sayers bought the 17 year-old outright in July and he remained at the Gidgegannup property instead of travelling back to Kentucky.

The son of breed-shaper Danzig has sired 32 stakes winners and, overall, has been represented by the winners of over 1100 races and $34 million in prizemoney. 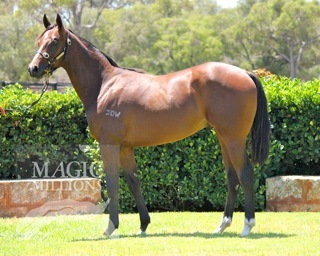