Front-runner La Tia landed her first Group 1 victory in the $300,000 Matriarch Stakes in California on Sunday.

The daughter of Yarradale Stud sire City Place (USA) lit up the final day of Del Mar’s November meet with a sparkling all-the-way victory over Queen of The Sand.  The runner-up is an Irish bred mare who had won a stakes race on the opening day of the Fall season.

Breaking from an inside gate, La Tia went directly to the front and established a one-length edge soon after the start of the 1600m contest on turf.  She held sway with determination and the closers couldn’t reduce the margin in the straight.

“This is my first Grade 1 win,” Chicago based trainer Armando De La Cerda said.  “La Tia worked last Saturday, then went to Lexington, and then came out here.  She galloped on the lawn two days ago and I felt she would like the firm going.”

La Tia (5m City Place – La Adelita by Sky Classic) had won to Group 3 level in on three occasions earlier this year in Chicago, New York and Woodbine.  She was also a brave fourth in the G1 Beverly D Stakes at Arlington in August.

“I love riding out here.  She was a little slow away but I got her going and she was game from there,” said jockey Jose Rosario who previously was one of the leading riders in Southern California but is now based on the East Coast.  “I knew those other horses would be coming, but my filly was tough.  She still had something left at the end, too.

City Place is a son of champion sire Storm Cat and Group 1 winning mare Glitter Woman.  He boasts an 82% winning strike-rate and is currently covering his first book at Yarradale Stud for an $8,800 (inc gst) service fee.

Stakes winners Metallic Storm (Metal Storm), Evan Astar (Kendel Star) and Heather (Grand Lodge) are among mares that have visited City Place. The dams of stakes winners Ladidi (dam of Choice Bro), Brown Eyed Girl (dam of Halibery) and Hip Hop (dam of Tramuntana) as well as the dams of stakes placed horses La Rochelle (dam of Khandallah) and Home Alabama (dam of Our Ol’ Fella) have also been covered this season. 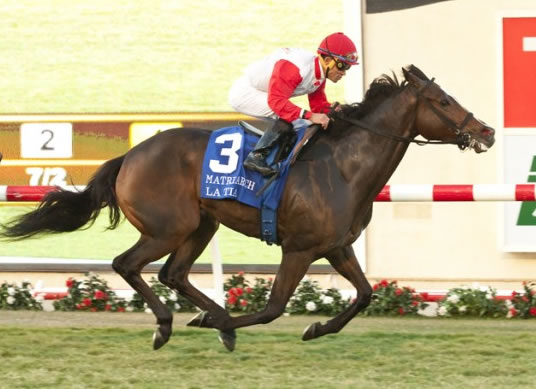