A successful career awaits Geisel Park graduate Invincible Me on the strength of his first-up victory at Morphettville.

After a fading 15 length loss on debut at Echuca in July, he returned a different horse to win the Wolf Blass Maiden (1050m) on Saturday.  Settling on the pace, he powered clear in the straight to score by a length for Lindsay Park.

“He had been trialling well and we expected a good run,” trainer David Hayes said.

Invincible Me (3g I Am Invincible – Amphritite by Statoblest) was a $55,000 buy for Prime Thoroughbreds out of the Geisel Park draft at the 2013 Perth Magic Millions.  “He was very good and confirmed the early promise he had displayed,” syndicate manager Joe O’Neill added.

The winner is by Yarraman Park sire I Am Invincible and kept his dam’s perfect record intact.  He is the sixth winner from six to race from Amphritite who won at Listed level for trainer Fred Castledine in the 2002 Gimcrack Stakes at Ascot. 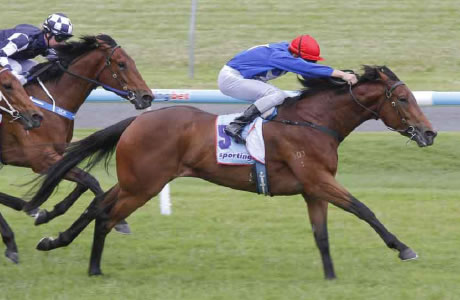