St Borealis travelled to Florida after victories at Ellis Park and Churchill Downs in Kentucky.  “I can’t say what I was thinking when we drew post 14 but Rafael (Hernandez) took her back and saved all the ground,” trainer Mike Maker said.  “She finished strong and that might be the right way to ride her.”

Eclipse Award owners Ken and Sarah Ramsay claimed the filly in August and she defied 14-1 odds to defeat Rock On Baby (Rock Hard Ten) and Wild Swava (Offlee Wild) by next to two lengths on turf.

St Borealis (4f War Chant – Saintly Bride by Saint Ballado) was bred in Kentucky by R-Cher Family Farm and is from a daughter of Aqueduct stakes winner Dancewiththebride (Belong to Me).

Now based permanently at Yarradale Stud, War Chant is available for a $17,600 (inc gst) service fee. 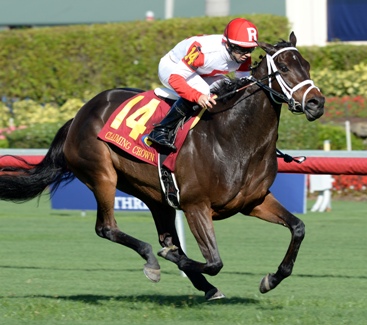