Home Tan in the Money at Kranji

Tan in the Money at Kranji

In-form trainer Alwin Tan saddled the $3 favourite El Padrino who was returning to the track for the first time since his heroics in South Korea.  Stablemate Happy Money had been working his way through the grades nicely and went out at $7.20.

Jockey Danny Beasley is in the farewell lap of a long stint in Singapore and he weaved Happy Money through a gap in the straight to win by a nose from Goal Keeper.  “It was an exciting race,” said Tan who prepared four winners on Sunday.  “Everyone was hoping El Padrino would win but I believed Happy Money had an advantage with a lighter weight.”

Tan is two wins behind Laurie Laxon for the Singapore trainers’ title with the finish line in sight.

Happy Money is a younger brother to Econsul mare Precious Gem.  She was runner-up in the G3 Tesio Stakes (1600m) at Moonee Valley in October and followed up with a Flemington victory in the $100,000 TAB Rewards Trophy (1700m) on Melbourne Cup day.

Econsul (NZ) stands at Darling View Thoroughbreds and the Mundijong nursery has catalogued 6 yearlings by resident sire Patronize as part of its draft for the 2015 Perth Magic Millions. 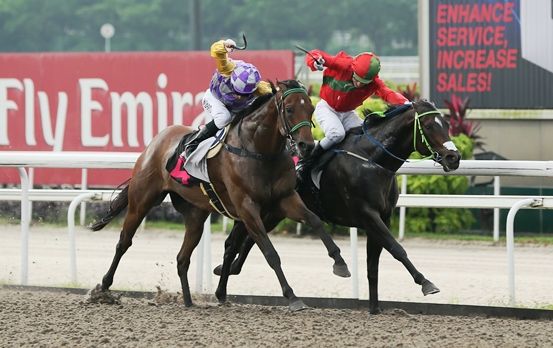