Dash For Cash sprinter Onerous has made a one-act affair of his return to racing in the Tour of Victoria Hcp (1109m) at Seymour.

The three year-old grey colt started well in the red on Thursday and never gave favourite punters a moment’s worry in running.  He cruised past the leaders at the top of the straight and coasted home to score by more than two lengths under Dwayne Dunn.

“He came back from a spell and trialled well at Werribee,” Dunn said.  “I knew he would be hard to beat today.  The further he goes, the better.”

Onerous (3c Dash For Cash – Amoroso by Revoque) blitzed a Bendigo maiden field on debut in August and then stepped straight up to Group 2 company in the Danehill Stakes at Flemington.  “He was very green down the straight,” Dunn recalled.  “That behaviour bewildered us – he shouldn’t have done that much wrong.”

Trainer John  Hawkes tipped him out after a disappointing midfield finish behind Rich Enuff and he returned off a 100 day break at Seymour.

Onerous races for a syndicate headed by Daleigh Park manager Steve Lester.  “He’s a younger brother to Arinosa and John reckons he’s heading the same direction,” the delighted owner-breeder said.  “She was still maturing as a three year-old and then took off winning 7 of her next 10 starts.”

Arinosa was rated Australia’s most improved mare in 2012-13 after graduating from a Benchmark 75 win at Canterbury to Group 2 victories in the Premiere Stakes and Sapphire Stakes at Randwick.

Lester owns their dam Amoroso and she foaled a Dash For Cash colt in September.

Dash For Cash relocated to Scenic Lodge last year where he stands alongside WA champions Blackfriars and Universal Ruler.  His first Sunspeed book comprised upwards of 50 mares at a $7,700 (inc gst) fee. 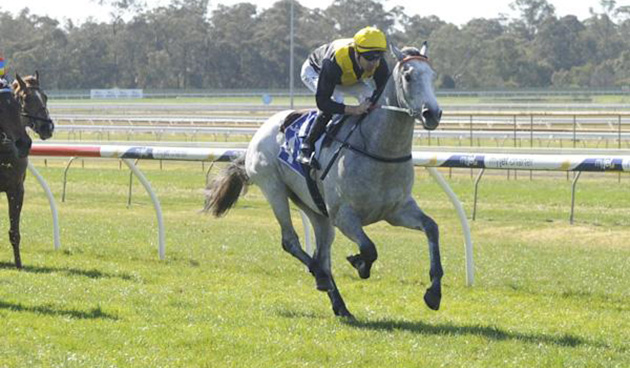