Another Awesome colt at Magic Millions

Gold Front Thoroughbreds owners Alan and Sue Olive returned to the Gold Coast Magic Millions on Wednesday with another gem from their blue-chip mare Awesome Planet.

Sold through Newgate Farm’s draft on Day 1, the Redoute’s Choice – Awesome Planet colt made $450,000 to the bid of Victorian agent Gary Mudgeway.

“I’ve bought him for clients of Leon Corstens,” Mudgeway said shortly after the hammer fell on the bay colt.  “We were near our limit but Leon really rates the mare’s first foal Awesome Rock.

“This colt’s an outstanding type and, given time, will develop into a top-class three year-old.”

Awesome Rock (Fastnet Rock) sold for $575,000 at the 2013 Magic Millions and he’s on track to recoup that price-tag after placings in the G2 VRC Sires’ Produce Stakes and G3 Caulfield Guineas Prelude last year.

The mare’s second foal is also by Fastnet Rock and she topped Day 2 of the 2014 Magic Millions at $400,000.  The filly’s in work with Mike Moroney and is expected to debut in the near future.

“Awesome Planet throws beautiful foals and that’s reflected in the sale ring,” Gingin based Alan Olive said.  “She was a Group 3 winner at Doomben and a Listed winner in New Zealand and her first three yearlings have totalled more than $1.40 million.”

The next Awesome Planet in the pipeline is a Pierro colt born in September and the mare is back in foal to Snitzel.

The Olives arrived in the Gold Coast shortly after celebrating Danaura’s victory in the Mandurah Cup at Pinjarra on Sunday.  The Danzero gelding had won the Grandstand Cup last month but was allowed to go out at $12.  He will now be set for the LR Pinjarra Classic on February 22. 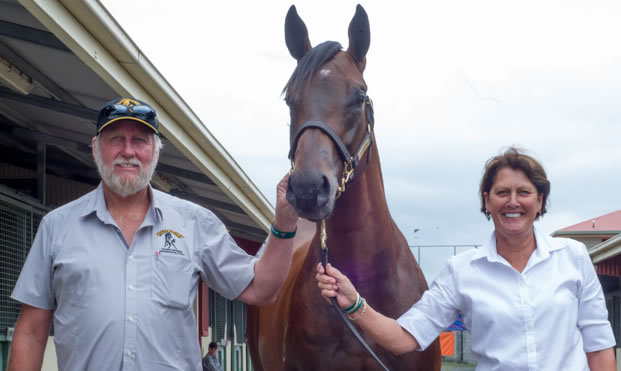