Blackfriars is on-track to equal career-best figures at stud after Black Heart Bart’s victory in the LR Summer Scorcher (1000m).

The Scenic Lodge champion has sired 4 stakes winners of 6 stakes races with more than half the racing year remaining.  His most successful season in the black-type department was in 2011-12 when he was represented by 8 winners of 12 races.

Black Heart Bart (4g Blackfriars – Sister Theresa by At Talaq) led home another feature quinella for his sire at the summer carnival.  He turned the tables on class act Shining Knight who had beaten him in the LR Crawford Stakes on December 13.

“He’s just a very talented horse who hits the line strongly,” trainer Vaughn Sigley said.  “We’re still learning what’s best – he loves these short sprints while fresh and I think he will eventually get out to a mile.”

Black Heart Bart was part of a Blackfriars double at Ascot on New Year’s Day following Pants On Friar in the NYD Event Hcp (2200m).

It would have been three if London Line had been awarded Race 1.  The Blackfriars filly was hampered shortly after the start and flew home to be beaten a long-head by Puteri Jewel in the Westspeed 2YO Plate.  Trainer Dan Morton lodged a protest and was livid when stewards dismissed the objection.

Morton and Scenic Lodge owner David Smith also finished second in the G2 Perth Cup with Red Blast.  He had won the LR Boulder Cup earlier this season before finding one better in the G2 C B Cox Stakes and G2 Perth Cup.

Red Blast (Universal Prince) had no excuses behind top mares Elite Belle and Real Love but pencil him in as a long-range prospect for the 2016 Perth Cup. 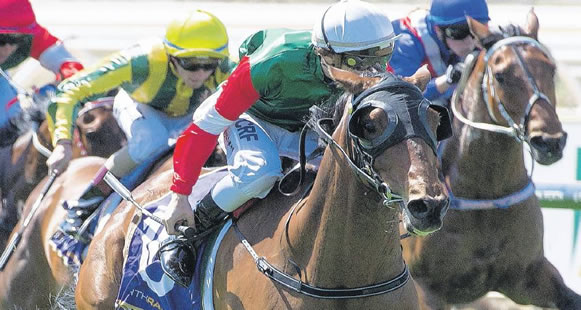