Puteri Jewel (2f Demerit – Aqua Velva by Spectrum) went out a $14 outsider in the Westspeed 2YO Plate (1100m) despite winning a Belmont barrier trial and she defied that quote to score in a three-way photo-finish.

Connections of both placegetters – London Line (Blackfriars) and Kentucky Lass (War Chant) – protested unsuccessfully against the front-runner in a controversial postscript to the race.  They alleged interference when the winner crossed from an outside gate to lead.

Puteri Jewel is trained by Simon Miller and is a homebred for Steve and Darryl Litton of Hamlin Bay Thoroughbreds.  They sold her for $40,000 through the Taunton Vale draft at the 2014 Perth Magic Millions and stayed in the filly with Malaysian politician Tengku Azlan Sultan Abu Bakar.

“She a lovely filly but is only lightly-framed and doesn’t carry much condition,” stable spokesman Michael White said.  “She’s got a lovely attitude and a big engine and that helped her see out 1100 metres first-up.”

Demerit is the first son of Lonhro to stand in Western Australia.  Along with stablemate Denman, he was part of Lonhro’s second crop and hit the ground running when runner-up to Black Caviar on debut in the LR Blue Sapphire Stakes at Caulfield.

Resuming as a spring three year-old, he won by four lengths at Cranbourne and then defeated Manhattan Rain and Starspangledbanner in the G3 Caulfield Guineas Prelude (1400m). 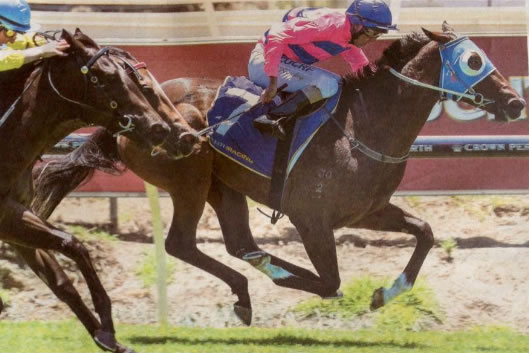