The $100,000 Mungrup Sprint (1300m) was the feature event at Frost Park and victory went to Perth sprinter Dawn Approach who races in the same interests as Group 1 winning mare Magnifisio.

Mungrup stallion Danehill Express weighed with Scampin who won the Shamrock Suffolk Stud Hcp (1100m) on Sunday.  A homebred for Lex and Shirley Piper, she filled out a winning treble for her sire last week following Blustery (Bunbury) and Shalo (Ascot).

If Danehill Express maintains that strike-rate, he should pass the $1 million mark in prizemoney over the next week or two.

Mungrup owner Gray Williamson was at Ascot on Saturday to lead-in Red Ora after the Westspeed 3YO Hcp (1200m).  The Due Sasso gelding looked beaten when headed by Volkoff in the straight but responded to remain unbeaten after three starts.

“Gray and his old school-mates from Aquinas College brought along a big crowd and good luck to them,” assistant-trainer Len Morton said.  “It’s great to see them involved and enjoying the win.” 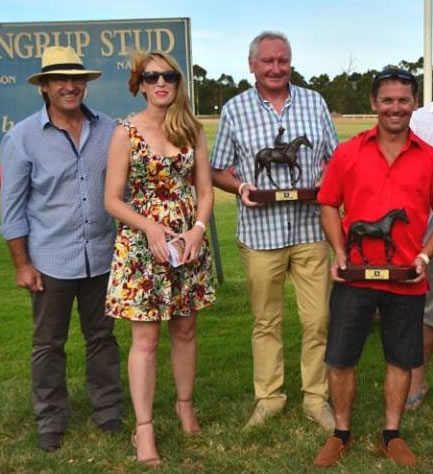