Trainer Daniel Pearce is taking advantage of the Westspeed Stayers’ Bonus with his promising galloper Friarpak.

The Blackfriars four year-old won a Bunbury maiden in his first 16 starts but has struck form with a winning hat-trick in the last month.  “He’s beginning to learn what it’s all about,” Pearce said.  “He’s maturing and progressing every start and is settling much better – he just lopes along and will stay all day.”

Friarpak (4g Blackfriars – Annapak by Star Pak) commenced the purple-patch with comfortable victories over 2000 metres at Bunbury and Pinjarra before stepping up to 2200 metres at Ascot on Wednesday.  He’s a younger brother to Listed T J Smith Trophy winner Dominicano and cost $50,000 from Scenic Lodge at the 2012 Perth Magic Millions.

“We kept a share with Daniel and it’s working out well,” Scenic Lodge general manager Jeremy Smith said.  “Friarpak has collected an extra $30,000 in Westspeed bonuses in the last month.  Full credit to Westspeed for introducing an incentive for three and four year-old stayers.

“It will only encourage people to buy yearlings bred to get over ground at the Magic Millions.”

There are 42 yearlings by Blackfriars available at the Perth Magic Millions on February 17 and 18.  Scenic Lodge has catalogued 19 of them starting with a cracking colt from Huit (Lot 21).

Black Tycoon’s trainer Justin Warwick bought his Teofilo half-brother for $82,500 at the 2014 Magic Millions.  Huit delivered another Blackfriars colt in September and is back in foal to him.

The Blackfriars three-quarter brother to Playing God & God Has Spoken (Lot 24) is another highlight on Day 1.  “He will be popular,” Smith predicted.  “He’s very much in the same mould – a strong, mature type.”

Scenic Lodge received $110,000 for his older brother at the 2014 Magic Millions.  Named Colorado Springs, he is on the books with Neville Parnham and will race for a syndicate headed by stable clients Santo Guagliardo and Colin Loxton.

Parnham bought Playing God and God Has Spoken on Loxton’s behalf for a total of $68,000 at the Perth Magic Millions and the brothers went on to earn $2.86 million in prizemoney. 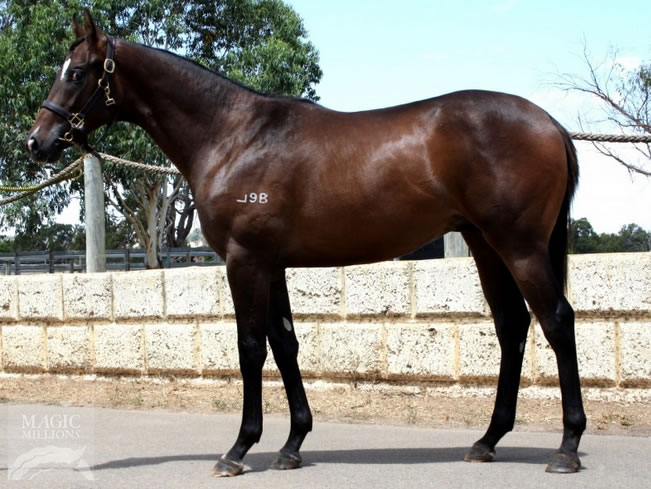