Group 1 mare La Tia will launch her latest campaign in the G2 Buena Vista Stakes at Santa Anita on February 16.

She hasn’t raced since winning the G1 Matriarch Stakes at Del Mar in November.

La Tia (6m City Place – La Adelita by Sky Classic) wintered in New Orleans and work rider Florent Geroux put her over 1200m at Fair Grounds last weekend.  “It was her best work yet,” trainer Armando De La Cerda said after she clocked 1.12s.  “I told Florent to not go too fast but she did it on her own.”

The daughter of Yarradale Stud sire City Place (USA) returned to the west coast on Monday.  “She will have two weeks to get comfortable at Santa Anita,” De La Cerda said.  “We will be stabled with Mark Casse – like we did last time at Del Mar.”

La Tia won Group 3 events in Chicago, New York and Woodbine last year and she was also a brave fourth in the G1 Beverly D Stakes before that elite level breakthrough at Del Mar.  It improved her career line to 10 wins and earnings of $983,300. 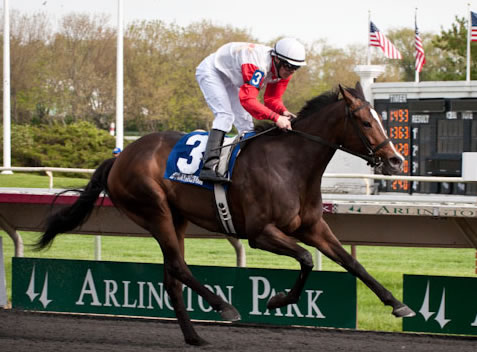