Nikki and Barrie Blatch achieved their greatest moment in racing on an otherwise desolate afternoon at Dunedin on Friday.

The Tapanui couple own and train Sureasyouwereborn who scored a courageous victory in the LR Dunedin Gold Cup (2400m).  “It couldn’t happen to nicer people,” commentator Dave McDonald said after their gutsy stayer defeated the favourite My Chino by three quarters of a length.

The Lucky Unicorn mare took the field up to tearaway leader Puddle Alley when he was the best part of 10 lengths clear down the back straight.  She levelled up approaching the home turn but appeared a spent force in the straight only to find another kick at the finish.

Sureasyouwereborn (4m Lucky Unicorn – Grey Swallow by Pentire) had won the Otago Cup (2200m) on Boxing Day and was fourth home in the Gore Cup on January 17.  She is the third stakes winner by her sire who stands at Westbury Park Stud in WA.

Celebrations were muted on a day dedicated to trainer Steve Anderton who died from a tragic stable accident on Tuesday.  His stable won two races on Friday – second-leg winner The Diamond One was led back to scale by his wife Claire after claiming the renamed White Robe Lodge in Memory of Steven Anderton Hcp (1600m).

The Andertons are the most successful racing family in New Zealand’s South Island.  Steve’s father Hec was a leading trainer for decades and his uncle Brian runs White Robe Lodge.

“Steve was the complete horseman and a credit to the profession,” Brian Anderton said.  “He went to Australia to further his knowledge of training and that showed through in all his success.  His death is a huge loss to the racing community, the Anderton family, his wife Claire and two young children Katie and Tillie.”

McDonald called The Diamond One home in a fitting eulogy to Anderton.  “She’s down in a bad spot on the inside and needs a bit help from there, Stevie boy,” McDonald declared as the field rounded the turn.

Jockey Rory Hutchings angled for an opening and, when the gap appeared, she exploded to the cheers of the crowd and McDonald’s emotional finale;  “The Diamond One, with an angel on each shoulder, has swept to victory.  Hutchings had help…I’m sure of that.” 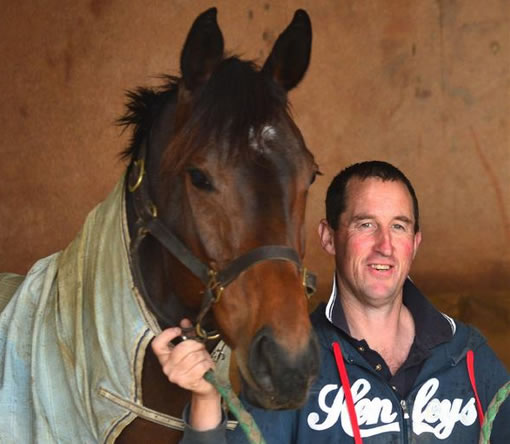