Lucky Street is being hailed one of Perth’s best two year-olds of the modern era after demoralising his rivals in the G2 Karrakatta Plate (1200m).

The Oratorio (Aus) colt was in control from the outset and put the race to bed with a brilliant turn of foot to win by four lengths over Mystic Maid (Patronize) and Showy Chloe (Alfred Nobel).  He clocked 1.10.68s which was only a half-second outside Bomber Bill’s race record set in 1998.

Bomber Bill transferred east as a three year-old and won a total of 17 stakes races all the way to Group 1 level in the Australia Stakes at Moonee Valley and Goodwood Hcp at Morphettville.

Trainer Trevor Andrews has Group 1 goals for Lucky Street starting with the Winterbottom Stakes at Ascot in November.  “He’s a super colt with a great motor,” Andrews declared at Ascot on Saturday.  “He will definitely go to the paddock now – I don’t want to take the sprint out of him.

“I would love to run him in the Winterbottom – at weight-for-age he will only have 52kg.  He would be a stallion prospect with a Group 1 next to his name.”

He has now earned $609,950 including Westspeed incentives of $55,000 for a syndicate that includes Andrews, Ken Gregson, Isaac Cohen, Ross Drage and their wives.

The $500,000 Karrakatta result assured Oratorio of another WA 2YO sires’ premiership.  The Mungrup Stud champion has juvenile earnings of $748,925 and is well on the way to a fifth title in that category.

Lucky Street is the third Karrakatta winner by Oratorio following Gold Rocks and Motion Pictures.  His latest is the penultimate foal of Rumours who also threw winners by Scenic, Bletchley Park and Danehill Express before being pensioned by Mungrup studmaster Gray Williamson last year. 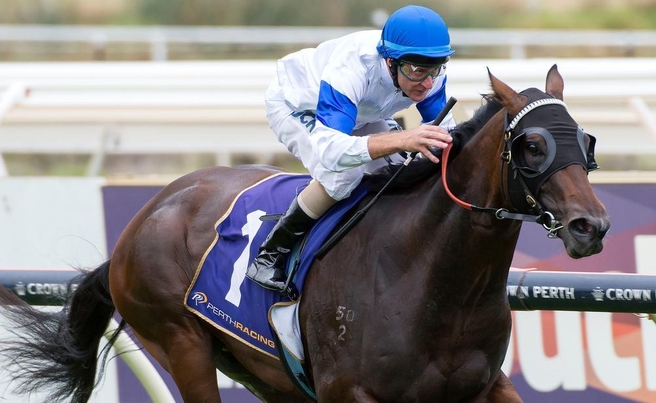