Yarradale Stud bred gallopers claimed a winning double in Victoria this week with Flash Black (Moonee Valley) and She Can Shazam (Ballarat).

Flash Black (4g Lonhro – Girl In A Storm by Metal Storm) scored a front-running victory in the City Jeep Patriot Plate (1200m) on Monday.  Racing for just the third time, he started an odds-on favourite and won like a horse heading for higher grades.

“He should be three-from-three,” co-trainer Wayne Hawkes said.  “It was a pretty cool ride by Dwayne (Dunn) and I think this horse is going places.”

Flash Black had been placed at Geelong and Ballarat in his first two starts earlier this season before the breakthrough in town.  “He’s a nice horse,” Dunn concurred.  “He still a long way from reaching his full potential and he will eventually get out to 1600 metres.”

Yarradale owner Ron Sayers bred and sold him for $100,000 through the Amarina Farm consignment at the 2012 Gold Coast Magic Millions and kept a share with clients of Team Hawkes.

Flash Black’s dam Girl In A Storm is a half-sister to G3 Sir Ernest Lee-Steere Classic winner Destino and she foaled a filly by Yarradale shuttler Frost Giant in October.

She Can Shazam (3f Zabeel – Musical Note by Marscay) is a Yarradale homebred and she also won her maiden third time out – albeit a dead-heat decision with Go Zeus – in the City of Ballarat Plate (1400m) on Thursday.

Griffiths also prepares class mare Girl In Flight for Sayers and she flew late for a first-up fourth in the G3 Frances Tressady Stakes (1400m) at Flemington last Saturday.  Her autumn goal is the G1 Queen Of The Turf Stakes (1600m) at Randwick on April 11. 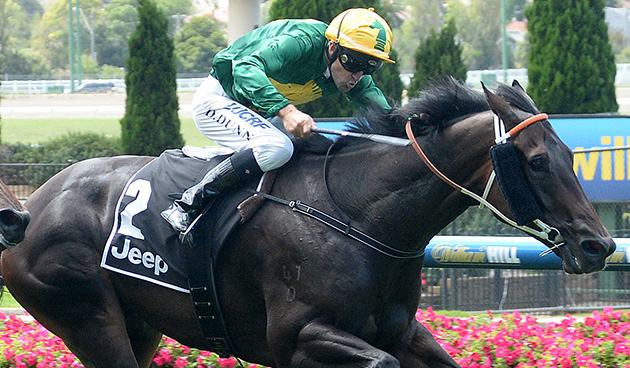