Alfred Nobel colt An Duine Uasal will head to England after winning second-up at Cork on Monday.

An Duine Uasal (2c Alfred Nobel – Dany Song by Yankee Victor) won the Irish Stallion Farms Maiden (1000m) after a midfield finish on debut at the Curragh last month.  He disputed the lead with short-priced favourite Greyscape and kept on well inside final furlong to score by three-quarters of a length.

“I was happy with him at the Curragh because he didn’t like the heavy ground,” owner-trainer Adrian Keatley said.  “He was a different proposition today.  He’s sharp and knows his job and ran straight as a gun-barrel.”

Keatley mentioned the Lily Agnes Stakes (1016m) as a possible target during the Chester carnival on May 6.

An Duine Uasal was sold for 4,200 euros (AUD 5,965) as a weanling at the 2013 Goffs Foal Sale.  His dam won twice in Italy and second dam Danyross (Danehill) was trained by Aidan O’Brien to win at Navan before finishing a length second to stablemate King Of Kings in the G3 Railway Stakes at the Curragh.

The Irish colt is Alfred Nobel’s second two year-old winner in Europe this year following Gin In The Inn at Leicester on April 10.

Alfred Nobel (Danehill Dancer) is based at Lynward Park in Bullsbrook and Showy Chloe opened his Australian account in the G3 WA Sires’ Produce Stakes at Ascot on April 11. 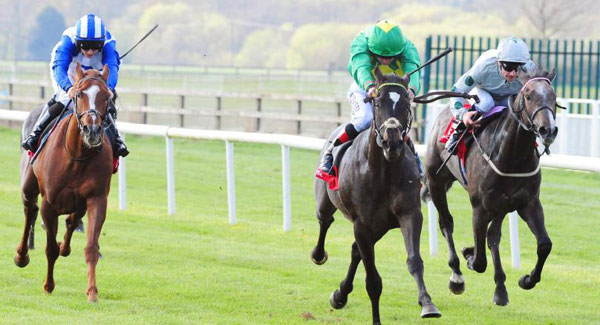