Arabian Beat (2c Black Minnaloushe – Arabian Design by Al Mufti) had shown plenty of natural pace in his first two starts but was expected to be up against it in a decent field of stakes winners.  He had won by 4 panels on debut in February and then went down a couple of lengths to Redcarpet Captain last month.

Settling well back with Craig Zackey aboard, he moved up smoothly and responded smartly to win by a length from Shaama (Redoute’s Choice).

His dam is an unraced sister to Arabian Lass who is the second-dam of the Dynasty colt that sold for a record-breaking ZAR 4.25 million at the South African National Sale on Wednesday.

Arabian Lass won the G1 Cape Fillies Guineas and G1 Premier’s Champion Stakes before a couple of ownership changes saw her arrive at Yarradale Stud in 2008.   Now a 21 year-old, she lost a healthy Frost Giant colt in a paddock accident last year and then missed to Patronize. 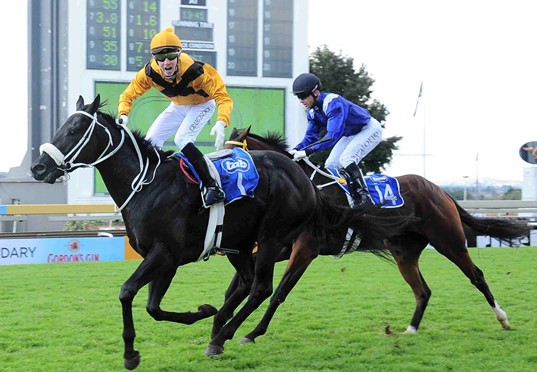