Snippetson filly My Poppette will be spelled and set for the G1 VRC Oaks after opening her black-type account at Flemington on Saturday.

Despite racing three-wide without cover, she toughed out a one-length victory in the LR Anzac Day Stakes (1400m) at headquarters.  “It was a big ask from a wide barrier but Mark (Zahra) was pretty confident,” co-trainer Cindy Alderson said.  “He let her stride forward and she hit the front pretty early but had enough left.

“We’ve always felt the filly will get over ground and she will be given an opportunity in races like the Thousand Guineas and VRC Oaks.”

My Poppette (2f Snippetson – Brompton’s Choice by Runyon) held a convincing advantage passing the post ahead of Lizard Island (Sebring) and Petracca (Starcraft) on Saturday.  She is the 8th stakes winner by Snippetson who has been signed to stand at Scenic Lodge this year.

“I rolled across and she did the rest,” Zahra said.  “You couldn’t ask her to do much more so far, she had a fairly tough run and won that quite well.  Why not put her away and see how she goes in the spring?”

My Poppette had won on debut win at Pakenham and followed up with an impressive second behind Black Vanquish at Flemington on April 11.  Trained by Alderson with her father Colin, the filly was bred by her mother Lyn and is raced in partnership with Mary Henzell.

The Anzac Stakes winner comes from a classic winning family.  She is from a half-sister to the dam of Neo (G2 Wellington Guineas) and other close relations include Delago Brom (G1 Australian Guineas) and his dam Brompton Cross (G2 Edward Manifold Stakes).

Snippetson has sired 8 juvenile winners this season and he will stand for a $6,500 (plus gst) service fee at Scenic Lodge. 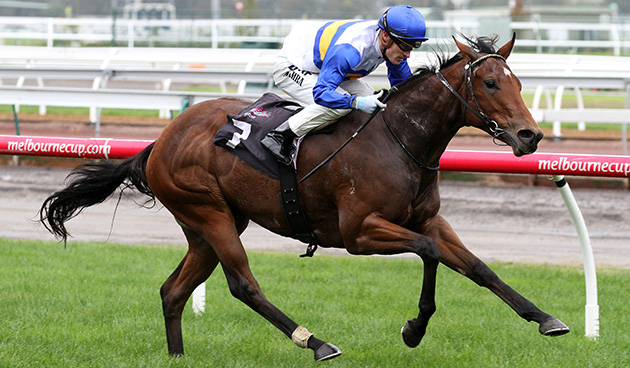