Mungrup Stud clients John and Sharon Molloy have celebrated one of their greatest wins in racing with Waterman’s Bay in the G3 Victoria Hcp (1400m) at Caulfield.

The Perth visitor had failed down the Flemington straight in the G1 Lightning Stakes and G1 Newmarket Hcp before flying off the corner with a powerful sprint at Caulfield on Easter Saturday.  He bloused out The Peak and Sistine Demon to claim his fifth stakes race for the Sunspeed breeders.

The Molloys bred him by using Mungrup stallion Eternity Range over their mare Parisian Princess (Ron Bon) who won six races in Perth.  She was also stakes placed in the 1997 Placid Ark Stakes.

“He had been working super but was a bit disappointing last time,” trainer Dan Morton said.  “I tapered off coming into today because there was plenty of residual fitness from the Perth carnival.”

Watermans Bay had been runner-up in the G1 Winterbottom Stakes behind Magnifisio before winning the G3 Scahill Stakes at Ascot in December.  He has won 10 races and $990,000 in prizemoney and will now head back home for a spell in Western Australia.

Eternity Range (Majestic Light) was a stakes winner at Saint-Cloud and Santa Anita and is from a half-sister to champion sire Miswaki.  The 22 year-old stallion still covers a handful of mares each season at Mungrup Stud where he has been based since 2002.

The Molloys lost Parisian Princess in October 2013, shortly after she foaled a colt by Dick Turpin. 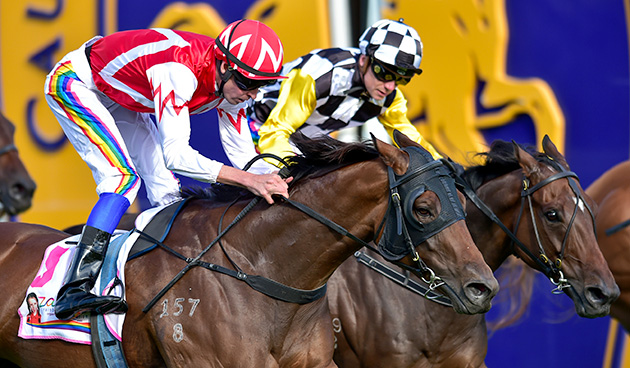