Delicacy completed an unprecedented classic campaign in the G1 SA Derby (2500m) at Morphettville on Saturday.

The Bob Peters homebred started an odds-on favourite and won like she had just joined in at the furlong.  “She puts them away with that amazing turn of foot,” jubilant jockey Peter Hall said.  “She’s awesome.  I saved her up for one dash because she’s got that pinpoint speed.”

She had won the G3 WA Oaks and G2 WA Derby before a last-start victory in the G1 SA Oaks on May 2.  Peters is no stranger to success at the highest level but even he appeared overwhelmed after hre fourth classic in six weeks.

“I’ve always said Miss Margaret has been our best three-year-old,” he explained.  “But I’ve never had a filly as strong and tough as Delicacy.”

There’s a possibility she could back up in the G3 SA Classic (2500m) at Morphettville next Saturday.  Long-term, the Melbourne spring carnival looms large for the latest interstate star out of Perth.

Peters has some unfinished business in the Caulfield Cup having been beaten a nose with Congressman in 1988.  And bookmakers have firmed Delicacy into $26 for the Melbourne Cup on November 3. 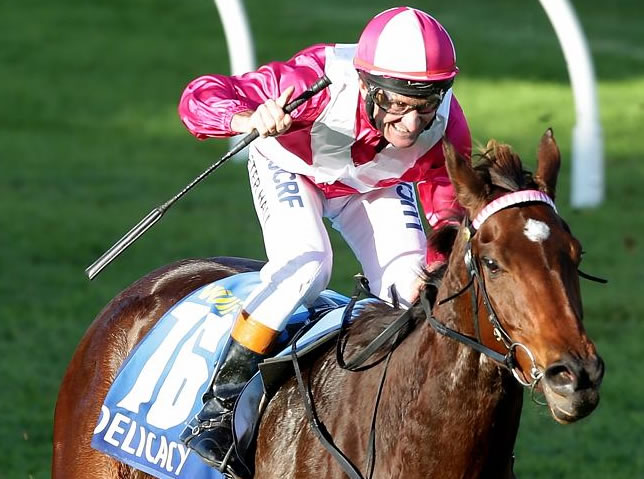