Loki’s Vengeance showed a new dimension when making a bold move up the rail to win the LR Affirmed Success Stakes (1200m) on Sunday at Belmont Park.

The Frost Giant colt broke on top before tucking in midfield on the fence.  Angel Cruz angled him wide into the lane and then cut back to win running away by almost two lengths.  ”I had the best trip in the race and went through on the rail,” Cruz said.  ”He did it all by himself.”

“The instructions were to wait and see how the pace unfolded.  I sat back, and when I asked him, I had horse.”

Loki’s Vengeance (4c Frost Giant – Subtle Sweetness by During) extended his stats to 4 wins in 12 starts and earnings of $253,710 for Blue Bison Stable.  “He’s been working really well,” Lorena Andersen, assistant to winning trainer Mike Hushion, said.  “They put pressure on each other up front and he was there to pick up the pieces.  I’m very proud of him.”

Loki’s Revenge had scored an on-pace victory in the LR Times Square Stakes (1300m) at Aqueduct this time last year.  He is one five stakes winners by Frost Giant who shuttles from New York to Yarradale Stud in WA.

Bred by Andrew Cohen, who manages Frost Giant at Keane Stud, he is the first foal out of winning mare Subtle Sweetness who has a 2yo colt and a yearling filly by Frost Giant.

Frost Giant (Giant’s Causeway) was a Group 1 winner in New York and will shuttle to Yarradale for his third southern book in 2015. 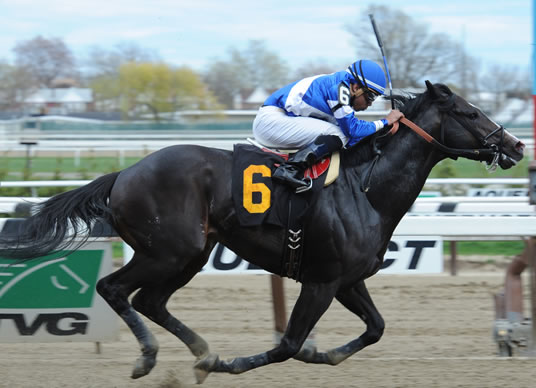