In-form trainer Lindsey Smith has a black-type assignment ahead of Madassa after the Vale Takeover Target (1000m) at Belmont.

Madassa (3g Due Sasso – Sayleuron by Don’t Say Halo) has finished either first or second in 9 starts following a two length victory over True Storm (Hurricane Sky) and Sujet (Vital Equine) on Saturday.

He’s a homebred for Michael Webb, Shaun Yeo and Larry Foley and they race him in partnership with Geisel Park owner Eddie Rigg.   “We will set him for the Beaufine Stakes next month,” Smith said.  “I will have to check how many rating points we may lose but it’s a nice race and will prove he’s not a one-trick pony.”

The Takeover Target victory was another racing highlight for Mills after his association with 10-time winner Cat In A Hat in a syndicate headed by Rigg.  “He cost us $35,000 and ended up earning about $350,000,” Mills recalled.  “And we had lots of fun squandering most of it on long lunches and trips to the Kalgoorlie carnival.”

Madassa is the third winner from Sayleuron who was retired following a bleeding attack at Belmont.  Her four year-old Cut Snake found his level winning three races during the last Esperance summer season.

Mills is a tax accountant based at Booragoon and is a nephew of Hall Of Fame trainer Jim Houlahan.  “We were going to export Madassa to Singapore at one stage.  Larry is based up there but we’re having too much fun to sell him now.” 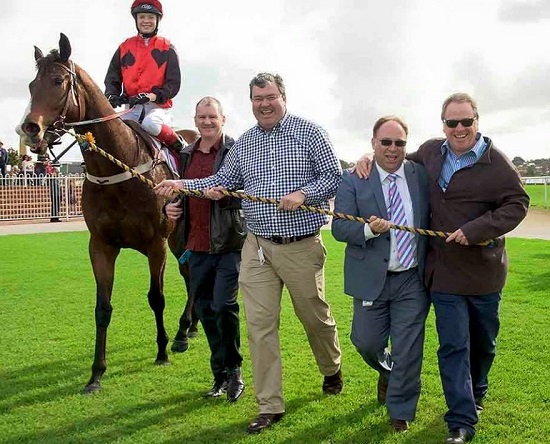