Home Best to come by Patronize

Best to come by Patronize

Patronize will stand for a $4,400 (inc gst) service fee at Darling View Thoroughbreds in Mundijong this year.

Patronize (Redoute’s Choice) is a three-quarter brother to champion sire Exceed And Excel and his latest winner arrived on Monday when Dance Mindy Dance scored first-up at Northam.  That followed Subi Central’s debut victory in the Avon Valley last Thursday.

“The best is yet to come,” Darling View studmaster Brent Atwell predicted.  “His winning strike-rate has been outstanding off small books in his first couple of crops.”

Atwell ensured quality books for Patronize when Yarradale Stud owner Ron Sayers and Geisel Park’s Eddie Rigg bought into the stallion in 2013.  “The numbers have increased and he’s covering lots of black-type mares now,” Atwell added.  “The first of them will be yearlings at next year’s Magic Millions.”

Patronize is finishing this season with a flourish – Pirates Fortune completed a hat-trick at Belmont on May 20 and Jestpathim won his fifth race at the same meeting.  Atwell is also looking forward to the return of his brilliant filly Mystic Maid who was runner-up in the G2 Karrakatta Plate before going out for a spell.

“Mystic Maid will be back for the three year-old feature races in the spring and summer.  All going well, we will set her for the Champion Fillies in November.”

Atwell and his father Clive are just back from the Magic Millions National Sale on the Gold Coast where they purchased several mares with the intention of putting them to Patronize.  “They foal down at Attunga Stud and we get them covered again the Hunter Valley before bringing them home to WA.”

Flying Spur mare Rock Revival has followed that route since changing hands at the 2013 Magic Millions National Sale.  She won 7 races in Sydney and has since foaled a colt and a filly by Lope De Vega for the Atwells and is due to foal to Patronize in September.

This year’s buys included Alltherightmoves (Johannesburg), a Brisbane Group 2 placed mare in foal to Choisir for $145,000 and Fauchon (Strategic), winning sister to Group 1 winner Meurice in foal to Pierro for $80,000.

“Standing Patronize at $4,400 makes him accessible to broodmare owners who breed to race or to sell at the Magic Millions,” Atwell said.  “His yearlings sold to $55,000 in February and we’re sure he will better those figures from next year onwards.” 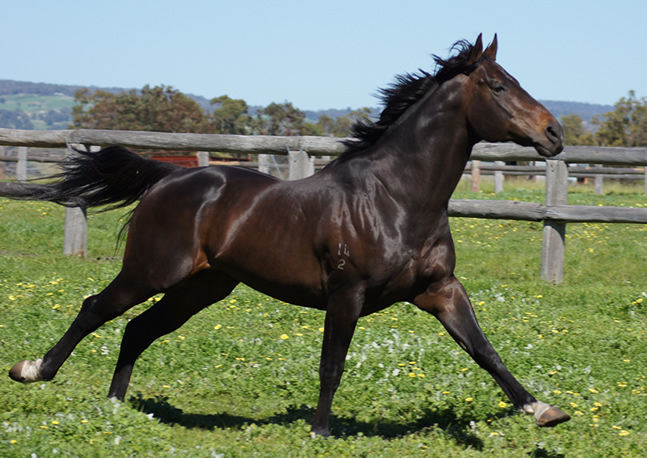