Mr Motown (3g Oratorio – Steely Gaze by Metal Storm) started an odds-on favourite after consistent campaign at Belmont.  Jockey Joe Azzopardi settled him just off the pace and they had enough in reserve to hold out Megafactory and Hellyer in a photo-finish.

Connections collected the last Westspeed Extra bonus of $27,500 for the season and that helped push his earnings up to $120,000.

He started with a double at Northam on Thursday (Keep On Dancin’ & The High Road) and trumped that with a treble at Broome on Friday (Wise Decision, Egg Freckles & Wizards Point).  Keith Biggs won with his homebred filly Dancing Express at Belmont on Saturday and Mr Motown rounded off the week with Yeah Yeah Yeah in the Goldfields on Sunday.

The High Road, Egg Freckles, Wise Decision, Yeah Yeah Yeah were all bred by Mungrup.  Steel Gaze is a Mungrup graduate while Wizards Point is from Oratorio’s first crop and is still winning.  He was bred and raised at Mungrup for John Molloy – just like Group 1 sprinter Watermans Bay.

Mr Motown was bred by Ron Sayers (Yarradale Stud) and sold by Eddie Rigg (Geisel Park) at the 2013 Perth Magic Millions and they both retained a share in the gelding.

His dam Steely Gaze (Metal Storm) is a grand-daughter of Mungrup Stud’s outstanding broodmare Silent Partner who foaled 8 winners in the 1980s and 1990s.  Silent Partner’s sire Sir Chatary (a grandson of Hyperion) stood at Mungrup for over a decade after winning the 1967 WATC Derby.

Oratorio will stand for an $11,000 (inc gst) service fee at Mungrup Stud this year. 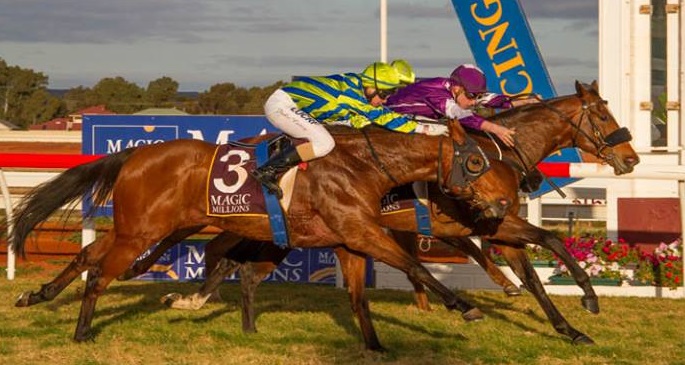