Mungrup Stud sire Hala Bek (Ire) has another progressive three year-old ready to rise through the grades in the Goldfields.

Local trainer Peter Fernie produced Inject The Venom for a last-start victory in the Wacca Nestler Memorial (1300m) at Kalgoorlie and he will only improve over longer trips.  “He’s a beautiful looking horse and has always shown us ability,” Fernie said.  “But he’s still learning and is going to be a stayer.”

Inject The Venom (3g Hala Bek – Folly Lane by Langfuhr) unleashed a powerful finish to win by a nose last Sunday at his first run back since an unplaced run at Bunbury in February.  “He’s still a bit light and needs to mature and put on weight,” Fernie continued.  “We will run him again next Sunday week and go from there.”

Hala Bek sired him from widely-travelled mare Folly Lane who won races at York, Kalgoorlie, Laverton and Broome for Fernie and his major client Andrew Inglis.  Among their better horses have been Saffron Fire (12 wins), Danterina and Morsecodian who won the 2013 Goldfields Toyota Cup.

Inglis is dealer principal of Goldfields Toyota and he’s also Chairman of the Kalgoorlie-Boulder Racing Club.

Folly Lane foaled another Hala Bek after Inject The Venom and Inglis has named him Shallow Hal.

Inglis also has a weanling colt by Mungrup Stud shuttler Dick Turpin from his Kalgoorlie winner Green Pulse.  She was bred back to Hala Bek last year. 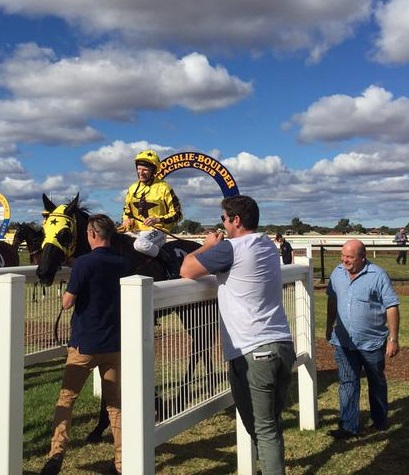