Home Wink in the pink at Belmont

Wink in the pink at Belmont

Wink And A Nod will be elevated to black-type company after her victory in the Mitavite Hcp (1300m) at Belmont.

The McFlirt mare started a short-priced favourite to claim her third city race in as many months and she looked a good thing winning by more than two lengths for trainer Justin Warwick and his apprentice daughter Lucy.

Saturday’s victory should have been her fourth in a row since racing returned to Belmont in May.   “She was very unlucky last time.  It was super run – she pulled up well and learned from that experience,” Justin Warwick said.  “There was a heap of speed today and she tracked into the race at the right time.  It was a 10 out of 10 ride by Lucy.”

Warwick said the mare will rise in the ratings and will be nominated to take on the State’s best short-course horses in the LR Bolton Sprint (1200m) at Belmont next weekend.

The LR Belmont Newmarket (1200m) is another stakes race connections will consider on August 8.

Wink And A Nod (5m McFlirt – The Westerly Win by Danewin) is the only foal from a mare related to Group 1 winners Marceau (Rawson Stakes), Runyon (Perth Cup) and Zasu (Champagne Stakes). 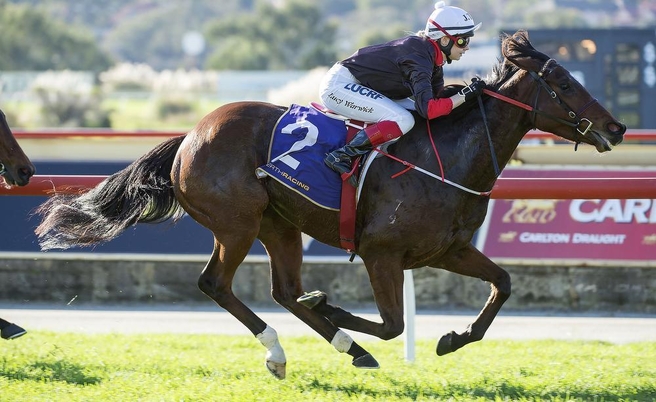