Running double for Kenjorwood at Caulfield

Snippetson stayer Kenjorwood won the $90,000 Cup Club Hcp (1700m) for the second year in a row at Caulfield on Saturday and connections are confident there’s a country cup in the gelding this prep.

The Peter Moody trained front-runner scored in a three-way photo from Jacquinot Bay (Galileo) and Extra Noble (Sir Percy).  Stable apprentice Regan Bayliss put him in the firing line from the outset and he kept kicking in a thrilling finish to the Group 1 meeting.

“Today gave me enormous satisfaction winning on a horse and for a trainer that have both been so good to me,” Bayliss said.  “He’s a big striding horse and I just let him get into a nice rhythm.”

Shouldering 57.5kg in this year’s Cup Club Hcp was a tougher ask than twelve months ago when he carried 51kg to win by four lengths in a tick outside the long-standing race record.

Kenjorwood (6g Snippetson – Flying Diva by Flying Spur) is races for a Tasmanian syndicate headed by Leigh Winwood.  He won the Alfa Bowl at two and was runner-up in the LR Tasmanian Guineas and LR Hobart Guineas before transferring to the mainland.

Last year’s Caulfield victory was followed by placings in the Moe and Kyneton Cups and they will be in the mix again.  Another option is the LR Cranbourne Cup (2025m) for prizemoney of $300,000 on Sunday, October 11.

Snippetson is covering his first Sunspeed mares at Scenic Lodge this year for a $6,500 (plus gst) fee. 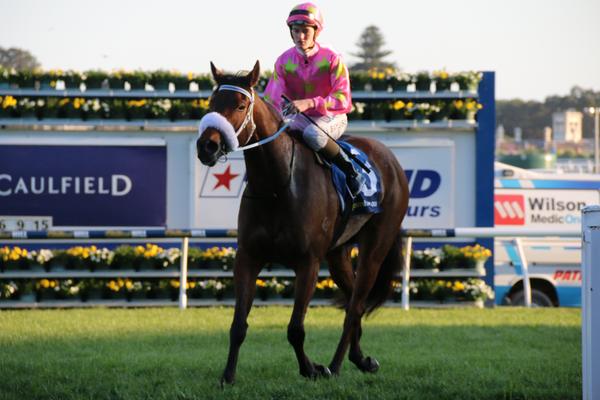