Knights Templar (8g Trade Fair – Step Aloft by Shirley Heights) was a winner at Roscommon and Leopardstown earlier in the season but was sent off an 8/1 chance having disappointed on his last two starts.  Jockey Gary Halpin settled the veteran behind the leaders and then split runners at the furlong to score by a length.

“Knights Templar is a nice horse,” Flynn said.  “He is a bit of a hold-up horse and he did the business.”

The son of Alwyn Park sire Trade Fair cost 36,000 euros as a foal at the 2007 Goffs November Sale and has won 7 of his 59 starts for owner Simon Girvan.

“I had to sit for plenty of time but I don’t think he was ever going to be a loser,” Halpin said after weighing in.  “He was a winner everywhere he went and had plenty of boot to get through the gap.

“He jumps and travels.  He is getting older and wiser and he doesn’t want to get there too soon.  He just does enough when he has to.” 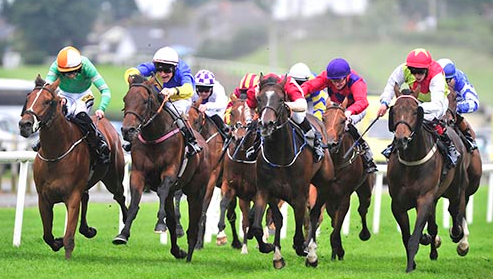