The Blackfriars gelding is boarding with trainer Leon Corstens at Flemington and is currently on the fifth line of pre-post betting at $11 for the $1.50 million classic next Saturday.

Kia Ora Koutou won a Pinjarra maiden in August and booked a trip east after making it four in a row at Belmont on October 3.  “We didn’t intend going too far with him this prep,” trainer Adam Durrant said.  “He just kept improving and then came through with flying colours against older horses over 2200m a few weeks ago.

“We’re under no illusions – it’s a hard task – but he’s a progressive horse and we’ve decided to roll the dice and have a go.”

Blackfriars (Danehill) won the 1998 Victoria Derby and Peter Moody’s stakes winner Eclair Surprise was one of the pre-post favourites to emulate his sire in 2010 but trained off prior to the classic.

Durrant prepared Kia Ora Koutou’s dam Kia Ora Miss (Jeune) to win the 2006 Belmont Oaks.  “He has the bloodlines to stay the distance and will certainly give them something to beat.  He’s going to end up one of the better ones by Blackfriars.”

Kia Ora Miss foaled another colt by the Scenic Lodge champion in 2013 but died the following February.  Her only other foal to race – Aloha Miss (Hurricane Sky) – won her fourth race for Durrant at Northam in August. 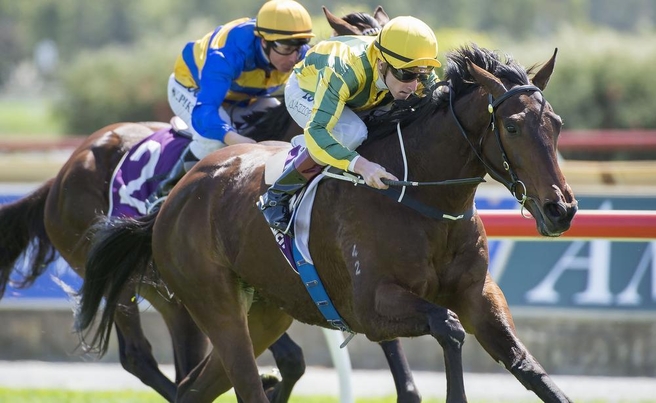