Dick Turpin colt Receding Waves has gone for a winter spell after a game second in the Tattersalls October Stakes (1200m) at Newmarket.

The sales-related prizemoney lifted Mungrup Stud’s Group 1 shuttler into sixth spot on the English freshman table as the northern-hemisphere flat season draws to a close.

“We hit the crossbar with Receding Waves going for that big pot,” trainer Richard Hannon said.  “He may not win any beauty contest, but he has an engine and is as tough as teak.  He won three for us this year and I expected him to be right in it because he has such a big heart.”

Receding Waves (2c Dick Turpin – Welanga by Dansili) chased the leaders and stayed on willingly to be beaten a half-length by Poet’s Prize at Newmarket.  He had won at Redcar, Chepstow and Haydock Park prior to his final outing for the year.

The colt is raced by Michael Cohen & Michael Daffey and is from a half-sister to LR Atalanta Stakes winner Out Of Reach (Warning).

Dick Turpin captured his first Group 1 as a summer three year-old with a four-length victory in the Prix Jean Prat (1600m) at Chantilly.  His first-crop leader will also be given a chance in black-type ranks next term although he may well stay in sprints instead of stretching out to a mile. 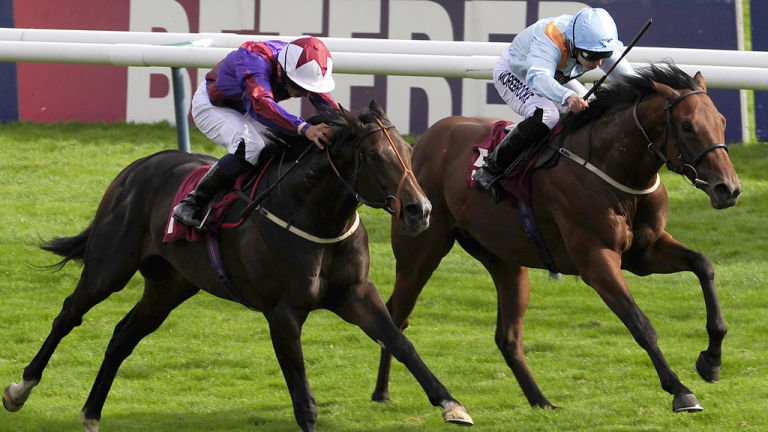 TOUGH AS TEAK
Receding Waves (near side) wins at Haydock Park