Easy kill for Ripoll at Kempton

Racing for the fifth time, Ripoll took keen hold from a wide draw and tracked the leaders before driving to the lead at the furlong.  He was coming off an excellent effort in a 1900m Wolverhampton nursery and appreciated the drop in grade and trip.

Her half-brother Aqaleem (Sinndar) was third in 2007 English Derby won by Authorized but suffered a serious pelvic injury and, after more than two years on the sidelines, was sent to Australia to win the VRC Henry Bucks Hcp (1600m) at Flemington.

Lindsay Park trainer David Hayes rated (Our) Aqaleem a leading hope for the 2010 Australian Cup before he fractured a shoulder in track work.

Hoofnote:  van Heemst homebred Drupa won his maiden over 1600m at Ascot on Melbourne Cup day.  The Perth Racing chairman stands his sire Trade Fair (GB) at Alwyn Park in Serpentine and the gelding has a yearling half-brother by Alfred Nobel. 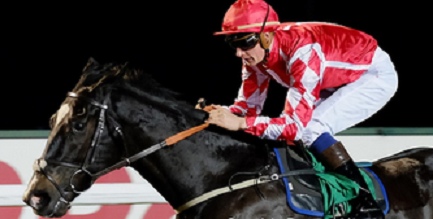