Sunspeed breeders Alan and Sue Olive fronted up at Ascot with a promising winner on Wednesday following a feature double during the spring carnival at Flemington.

Their progressive galloper Big Red Costa graduated from three placings at the provincials to lead all the way over 1500 metres.  He had finished a sole juvenile campaign when sixth in the G3 WA Sires’ Produce Stakes in April.

“He’s been unlucky and got beaten by a couple of smart ones at Bunbury,” trainer Wally Mitchell said.  “He’s a big bloke and is bred to stay.  He will run in the (G2) WA Guineas and will then go straight out for a spell – I think he’s a WA Derby horse for next year.”

Big Red Costa (3g Von Costa De Hero – Miss Aryan by Masterclass) was purchased for $15,000 out of the Yarran Thoroughbreds consignment at the 2014 Inglis Melbourne Premier Sale.  He is a half-brother to G2 MVRC Alister Clark Stakes winner Domesky (Domesday).

The Olives operate Gold Front Thoroughbreds near Gingin and their homebred Awesome Rock is also getting ready for the Ascot summer carnival.  He claimed the LR Symphony Stakes (1800m) on Melbourne Cup Day and has been nominated for the G1 Railway Stakes (1600m) and G1 Kingston Town Classic (1800m).

They bred and sold Awesome Rock for $575,000 at the 2013 Gold Coast Magic Millions and kept a share with Stan Saric among other clients of trainer Leon Corstens.

Awesome Rock is a son of champion sire Fastnet Rock and had been placed in the G2 VRC Sires’ Produce Stakes and G3 Caulfield Guineas Prelude last year.  “It was fantastic to get him back in the winner’s stall especially on such a big day,” Corstens said at Flemington.  “And it looks good on his record as a stallion prospect.”

The Gold Front couple also have a share in Excess Knowledge (GB) who won the G3 Lexus Stakes (2500m) by a nose on Victoria Derby Day and then survived a protest to secure the last spot available in the G1 Melbourne Cup (3200m).

He led the Cup field into the straight and gave a great sight to be beaten only three lengths into 7th place.  Trainer Gai Waterhouse and connections are already counting down to next year’s Cup.

Excess Knowledge (Monsun) is by the same sire as Gai’s Melbourne Cup winner Fiorente and raced just six times for Juddmonte Farms in England before his sale for a reported $1 million. 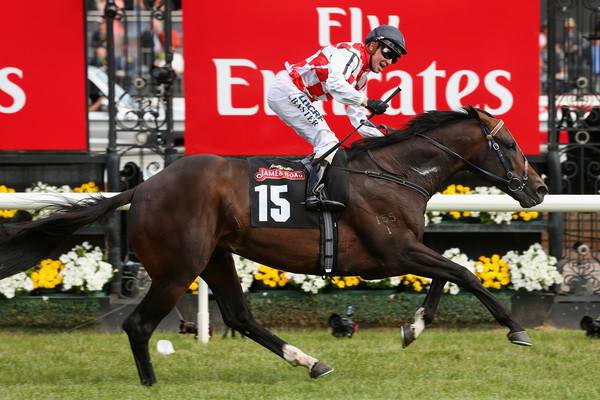