Frosty Margarita was favoured to win the LR Key Cents Stakes (1200m) at Aqueduct on Sunday and she didn’t disappoint, delivering a front-running, never-in-doubt victory.

The daughter of Yarradale Stud shuttler Frost Giant (USA) took the lead from an inside gate and never looked back in the $100,000 sprint.  She defeated last-start stakes winner Melodic (Tale of the Cat) by three lengths with ears pricked and they streeted the rest of the field by six panels.

“She ran the way we expected,” trainer Rudy Rodriguez said.  “She got a nice comfortable lead and then took it home.  Cutting back in distance was the best thing we did.”

Rodriguez has been an instant success as a conditioner in New York.  He retired from the saddle in 2010 after a career that included a Group 1 victory on Frost Giant in the Suburban Hcp.

Frosty Margarita (2f Frost Giant – Mango Margarita by Not for Love) had been runner-up at her last two starts in the LR Joseph Gimma Stakes (1400m) and Maid of the Mist Stakes (1600m).  “We’ve figured her out now,” jockey Irad Ortiz Jr said.  “We thought she liked to run a little relaxed but today we let her go and she showed us what she’s got.  She fights and she has a lot of potential.”

Frosty Margarita won her maiden at Saratoga in August and has earned $195,800 in five starts for Gabrielle Farm owner-breeder Chip Acierno.

Frost Giant (Giant’s Causeway) will have his first Sunspeed yearlings catalogued for the Perth Magic Millions in February.  A bout of colic while in quarantine meant he didn’t shuttle to WA this year but Yarradale owner Ron Sayers is looking forward to his return in 2016. 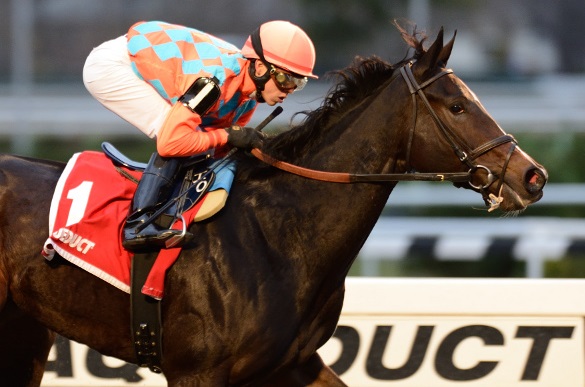