Trainer Bede Murray will take War Prodigy to town after the War Chant colt broke through for his first win at Kembla Grange on Melbourne Cup day.

Stepping up to 1600m for the first time, he sat on the pace to defeat the Gai Waterhouse import Sea Spirit (GB) by a half-head in the Camp Quality Convoy Plate.  “He will get further than a mile,” Murray said.  “He’s a beautiful horse but I’ve had to let him know who’s boss.

“He will have to be gelded and will eventually race in Singapore for his owner Thomas Loke.”

War Prodigy is by Yarradale sire War Chant (USA) and is bred to get over ground on his dam’s side.  Admiring (Street Cry) won three races in Perth and was also placed in the G2 C B Cox Stakes (2100m) and G3 WA Oaks (2400m).  Her half-sister Empire Dancer (Second Empire) won the 2005 Belmont Oaks and Belmont Classic.

Murray bought War Prodigy for $200,000 at the 2014 Perth Magic Millions and his younger half-sister by Medaglia d’Oro made $520,000 at this year’s Inglis Easter Sale.  She was purchased by Chris Waller and has been named Kirini.

War Chant (Danzig) sired his 33rd stakes winner – and his first in Australia – after Chantski nailed the LR Gimcrack Stakes in March.  He unveiled another black-type prospect in September when Bombs Away won two-from-two at Belmont. 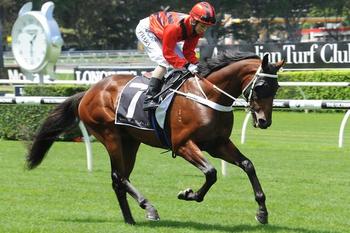