Hong Kong sprinter Hard Ball Get is the latest international winner to graduate from the Perth Magic Millions.

Hard Ball Get (6g Aussie Rules – Aqua Velva by Spectrum) won the Po Yan Hcp (1400m) at Sha Tin last Saturday after being given the run of the race on the rails by Joao Moreira.  He angled into the clear in the straight and then ranged up to defeat Snow Slider (Savabeel) by a neck.

The Sunspeed galloper was bred by Darryl Litton of Hamlin Bay Thoroughbreds and sold for $62,000 out of Geisel Park’s draft at the 2011 Perth Magic Millions.  He won 3 races for Aquanita trainer Simon Miller and signed off with a Group 3 victory in the Sir Ernest Lee-Steere Classic.

His only loss in Perth was behind stablemate Miss Bux in the LR Placid Ark Stakes.

Hard Ball Get was subsequently sold to Hong Kong owner Anthony Cheung Hin Shun who has his horses stabled with David Hall.  The gelding was overdue after being runner-up 3 times in his last 4 starts.

Litton also bred and kept a share in his younger half-sister Puteri Jewel (Demerit) who won on debut at Ascot after making $40,000 to the bid of Aquanita at the 2014 Magic Millions.

He retained her full sister who failed to reach a $40,000 reserve at this year’s Magic Millions.

Hamlin Bay Thoroughbreds are also in the partnership that stands Demerit at Taunton Vale Stud.  The stakes winning son of Lonhro has a half-dozen yearlings catalogued for the 2016 Perth Magic Millions. 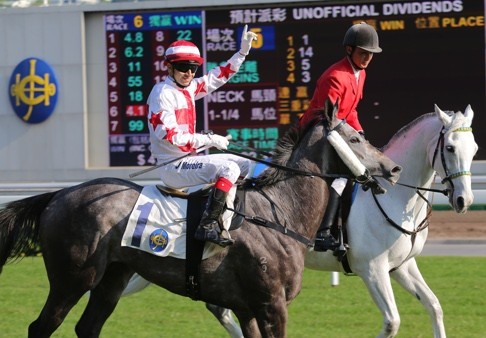