Sugartime Jazz has been a solid performer in Singapore for Mungrup Stud sire Danehill Express.

He has won 4 races and been placed 10 times at Kranji for the equivalent earnings of AUD 160,765 since Korilya Stud sold him for $30,000 at the Perth Magic Millions.

The Brian Dean trained gelding struck again on Friday evening after racing in traffic until the furlong.  He darted through a gap and then held off the fast finish of Beat To Quarters (General Nediym).

“He can be a difficult horse to ride,” Panamanian jockey Oscar Chavez said recalling an incident last year when he was unseated by the Sunspeed import while returning to the winner’s stall.  “He doesn’t like horses around him and has to be pushed along to remind him that he has a job to do.”

Sugartime Jazz is the only starter to date for NZ bred mare Gertrude McFuzz (O’Reilly).  She has a Scandal Keeper colt on the ground and was bred back to Universal Ruler in November.

Mungrup Stud has 5 Danehill Express yearlings entered for the Perth Magic Millions next month.  Among them is Lot 218, a half-sister the Adam Durrant trained Beckers.  He is by Hala Bek and was an encouraging winner over stablemate Starry Dane (Danehill Express) when stretching out to a mile at Northam earlier this season. 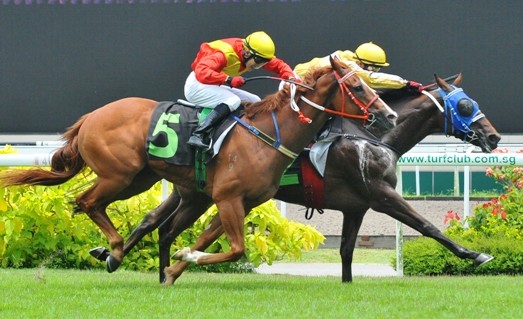