Frost Giant’s first yearlings will parade at the Perth Magic Millions on the back of sensational year by sons of Giant’s Causeway in North America.

Gaint’s Causeway is also the sire of Irish-based Shamardal who racked up 30 stakes winners world-wide in 2015.  The Darley champion is bred on the same Mr Prospector cross as Frost Giant.

Yarradale Stud has entered a half-dozen Frost Giant yearlings for the Magic Millions and among the highlights is the grey filly from Born Princess (Lot 245).  Her dam was trained by Team Hawkes and won in Sydney and Melbourne before her form fell away after striking severe interference in the Rokk Ebony Cup at Caulfield.

Frost Giant launched his stud career with first and second-season premierships in New York.  He had four crops of racing age in 2015 and was a Top 5 stallion with earnings of $1.74 million.

Those results came off small crops of 32 and 24 named foals from his first two books.

Bookmakers firmed Mor Spirit into an 8-1 second-favourite for the 2016 Kentucky Derby on May 7.

Eskendereya was based at Taylor Made Stallions before his sale to the Japan Bloodstock Breeders’ Association (JBBA) in September.  He had been the overwhelming pre-post favourite for the 2010 Kentucky Derby before an injury ruled him off the Triple Crown trail.

Giant’s Causeway stallion First Samurai sired his latest feature winner when Stacked Deck claimed the G2 Kennedy Road Stakes at Woodbine in November.  He has been represented by 22 stakes winners and sired Group 1 winners in each of his first three crops.

First Samurai stands at Claiborne Farm after a career that included Group 1 juvenile victories in the Champagne Stakes and Hopeful Stakes.  His yearlings sold to $300,000 at the Keeneland September Sale.

WinStar Farm resident Hold Me Back added a Group 3 in November when Jet Black Magic exploded to victory in the $400,000 Princess Stakes at Delta Downs.  The four-length win also earned her 10 qualifying points towards the G1 Kentucky Oaks on May 6.

Hold Me Back won the G2 Lane’s End Stakes and was runner-up to Summer Bird in the G1 Travers Stakes.  He sired 10 stakes performers from just two crops in 2015 and is one of Giant’s Causeway’s most promising sons in Kentucky.

Several other Giant’s Causeway stallions weighed in with stakes winners towards the back-end of the year.

Cowboy Cal stands at Pin Oak Stud in Lexington and he was a leading juvenile sire among North America’s third-crop sires in 2015.  Among his black-type winners were Marquee Miss (Arlington), Simple Surprise (Saratoga) and Fear The Cowboy (Gulfstream Park).

Rockridge Stud freshman Giant Surprise has been represented by the Belmont Park stakes winners Sudden Surprise (Notebook Stakes) and Super Surprise (Maid of the Mist Stakes) plus the stakes placegetters Taken by Surprise and Surprise Cameo from his first 10 starters!

Giant Surprise was trained by Todd Pletcher and was a brilliant four-length winner on debut at Saratoga.  It was later discovered the colt sustained a fractured left foreleg during the race.

Giant Oak is also bred on the Northern Dancer – Mr. Prospector cross and his credits as a racehorse included victories in the G1 Clark Hcp at Churchill Downs and G1 Donn Hcp at Gulfstream Park.

Frost Giant (pictured) missed the shuttle flight to Western Australia last year due to a bout of colic while in quarantine but Yarradale Stud owner Ron Sayers is looking forward to his return in 2016. 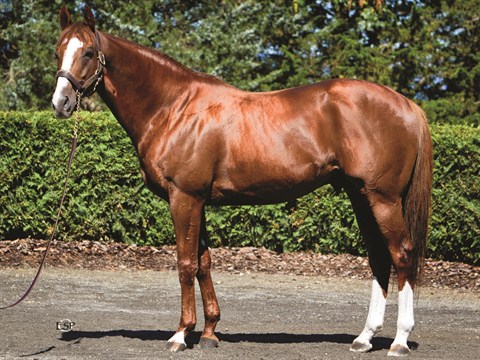