Ascot trainer Trevor Andrews kick-started the Perth Magic Millions yearling sale on Monday with a $135,000 bid for the Your Song half-brother to The River.

Catalogued as Lot 3 from the draft of Western Breeders Alliance, the colt topped the first session with a Snitzel colt offered by Amelia Park.

“We’ve got The River and I thought I had better strike early,” Andrews said.  “I’ve pretty much sold him already.   He will be up-and-running for the Magic Millions next year and I’m pleased to get hold of him.”

Andrews bought The River for $115,000 from Western Breeders Alliance last year.  He won the WA Magic Millions 2YO Classic last Sunday and will now be set for the $500,000 Karrakatta Plate in April.

Amelia Park sold the Snitzel – Royale Harvest colt that was purchased by Singapore owner Constance Cheng for $135,000 and the Vasse nursery also supplied the Sebring – Madame Shinko colt that was knocked down to Dan Morton for $120,000.

“He’s off a good farm and we were trying to buy horses like that at the Gold Coast a few weeks ago and we couldn’t get near them,” Morton said.  “He’s very well grown already and is just going to make into a lovely athletic horse.”

Yarradale Stud based Gingerbread Man led the locally based first-season sires with a colt from Morine that was purchased by Astute Bloodstock from the draft of Korilya Stud for $75,000.

“He’s a nice style of horse,” trainer Simon Miller noted.  “He’s a half-brother to Man Booker who’s won a WA Guineas and seems well above average.  I liked his attitude and he moved so well.  He’s got a big girth and a strong hindquarter so all that hopefully equates to being fast!”

“It’s been a pleasing start,” Magic Millions managing director Vin Cox said.  “Last year’s average was about $37,000 and we’re sitting just above that.  There’s some high profile lots on Tuesday so we anticipate building on the good numbers already.” 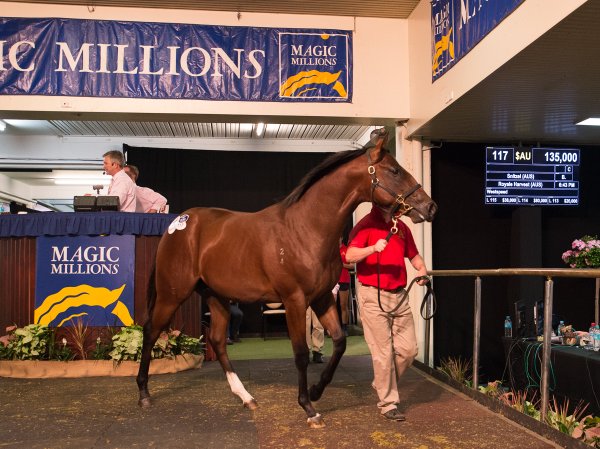