The David Harrison trained front-runner was backed in from $7 to $3.80 before the Morley Growers Market Plate (1200m) on Saturday and the market move paid dividends when she won by a length from the favourite Wrinkly.

“She got back and ran on first-up at Bunbury so I told Pat (Carberry) to ride her as you find her,” Harrison said.  “She jumped the gates like a gazelle then laid her ears back and had a real go in the straight.

“She’s casual at home but wants to beat them on raceday.”

Ellens Choice (2f Rogano – Caldo by Trade Fair) is owned by Helen Lewis and is the first foal of a mare who won at Northam and Pinjarra.  Second dam True Vigil (Is It True) is a blood-sister to LR Colonel Reeves Stakes winner Scout’s Honour.

Caldo was sold by Korilya Stud for $400 at the 2014 Perth Magic Millions Winter Sale and new owner Maurice Sheridan had her covered by his stallion Akhenaton in October.

Rogano (Redoute’s Choice) is a brother to Arrowfield stallion Not A Single Doubt and won his first two starts at Canterbury in 2009-10.  After a fading fifth in the Listed STC Darby Munro Stakes at Rosehill, he was sidelined for 12 months before returning for a first-up victory at Hawkesbury in April 2011.

Oakland Park owner Neville Duncan acted on Not A Single Doubt’s very promising start at stud with a successful offer to relocate Rogano to Western Australia.  He stood for a $6,600 (inc gst) fee last year. 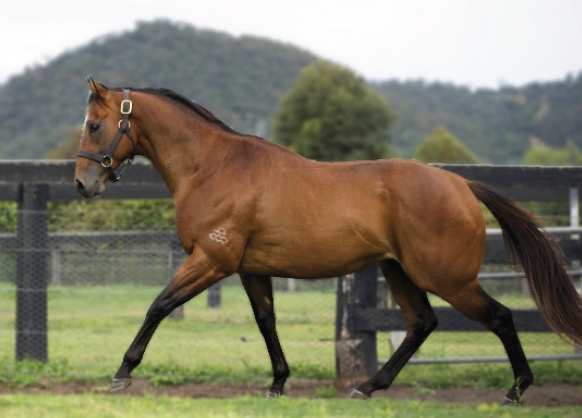