Gabrielle Farm homebred Frosty Margarita completed a stakes winning treble with a front-running victory in the LR Maddie May Stakes at Aqueduct on Saturday.

The daughter of Yarradale Stud shuttler Frost Giant (USA) had won the LR Key Cents Stakes and LR Fifth Avenue Stakes at her final two starts in juvenile company and she stretched out from 1200m to 1670m first-up as a three year-old.

Frosty Margarita broke sharply from the machine and set up a six-length lead before stablemate Katniss the Victor motored home to miss by a nose.  Third placed Mecke’s Madalyn was 17 lengths in arrears.

“We won last time sprinting and today she put in a mile,” jockey Irad Ortiz Jr said.  “She’s a nice filly and we get along good although she doesn’t like it if you fight her.  You’ve got to keep the stick away but she gave me everything.”

Frosty Margarita (3f Frost Giant – Mango Margarita by Not for Love) boosted her earnings to $345,800 and is now established as the leading locally-bred 3yo filly in New York.

“She ran very good and stole the race in the very beginning,” trainer Rudy Rodriguez.  “We thought Absatootly was going to go with her from the start but once she didn’t it made it easier for our filly.”

The fifth winner from La Sirenuse arrived on January 20 when Culverin (Musket) broke through at Ascot for part-owner and trainer Fred Kersley.  Her 2yo is a filly with Dan Morton named Amalfi Lass (War Chant) and, following her Frost Giant yearling, she foaled a Gingerbread Man colt in October. 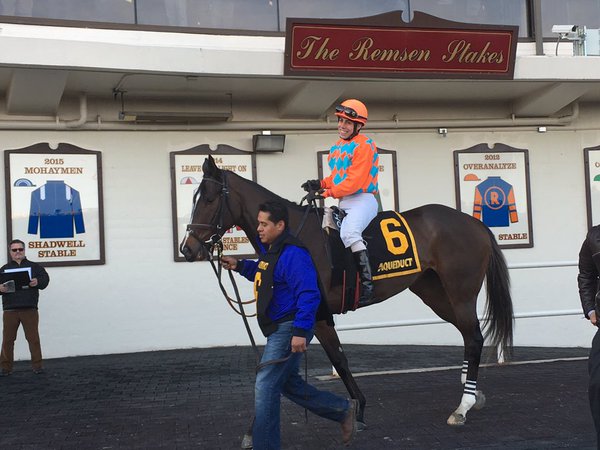