Snippetson filly Security Belle is the one to beat in the $100,000 Capricornia 2YO Classic at Rockhampton next month after a brilliant first-up win on Thursday.

The unbeaten local created a big impression on debut at Callaghan Park in November and she resumed with a front-running 7 length victory in the Regional Insurance Brokers Hcp (1100m).

“She’s grown up since that first win and there’s a lot more improvement to come in the next six months,” trainer Fred Smith declared.  “She controlled the race in the lead today but I think she’s a better chaser.”

Security Belle (pictured) is by Scenic Lodge sire Snippetson from Kai Chow (Sanction) who won the 2003 Capricornia Classic.  “She’s come back real good and has definitely strengthened,” Smith added.  “I wouldn’t swap her for anything else in the Classic.”

Smith and part-owners Max Ison & Pat Paterson bought her for $28,000 at the 2015 CQTBA Yearling Sale in April.  “Pat’s a dairy farmer and an old mate,” Smith explained.  “He races Motorised who has won 7 here and another at Doomben since coming up from Melbourne.”

And his grand campaigner Rebelson will be all for winning Race 1 at Ascot.

Snippetson yearlings have sold to $100,000 (Inglis Classic) and $75,000 (MM Gold Coast) and there are 4 colts and 3 fillies scheduled to sell at the Adelaide Magic Millions on Monday week, March 14. 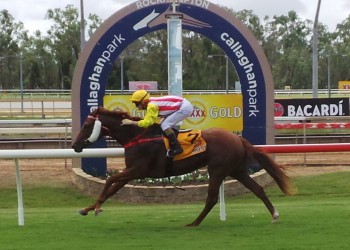